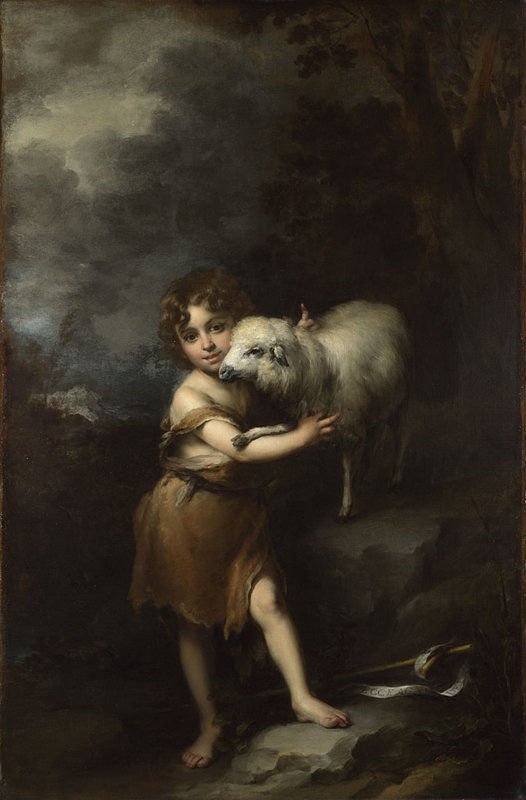 'Look: there is the Lamb of God'

Seeing Jesus coming towards him, John said, ‘Look, there is the lamb of God that takes away the sin of the world. This is the one I spoke of when I said: A man is coming after me who ranks before me because he existed before me. I did not know him myself, and yet it was to reveal him to Israel that I came baptising with water.’ John also declared, ‘I saw the Spirit coming down on him from heaven like a dove and resting on him. I did not know him myself, but he who sent me to baptise with water had said to me, “The man on whom you see the Spirit come down and rest is the one who is going to baptise with the Holy Spirit.” Yes, I have seen and I am the witness that he is the Chosen One of God.’

In our painting by Bartolomé Esteban Murillo, we see a young John the Baptist clothed in camel hair embracing the lamb, a symbol of Christ’s sacrifice. There is a loving interaction between the two. The lamb has his right foot on John’s right arm. John’s left arm is pointing upwards towards heaven. In the bottom right corner we see John’s reed cross with a ribbon inscribed with the words of our Gospel reading today in Latin: ‘Behold, the Lamb of God’ / Ecce Agnus Dei. By depicting Saint John the Baptist as a child, Murillo wanted  to appeal to the viewer. The endearing image of a child would encourage the viewer to imitate a child-like state of innocence and purity.

When Saint John the Baptist called Jesus the Lamb of God, the Jewish people would have immediately understood the sacrificial nature of these words. There is the lamb and Isaac; also the Passover feast involved blood that would be shed and sprinkled on the door posts. Twice every day, morning and evening, in the Temple, for the burnt offering for sin, a lamb would be slain too. So the image of a sacrificial lamb was one the Jewish people would be very familiar with.

Saint John says pointing at Jesus that ‘there is the lamb of God that takes away the sin of the world’. Note that he mentions ‘sin’ and not ‘sins’. To use sin as a singular word, it implies that Jesus wants to root out and destroy sin as a whole, and just just the myriad of symptoms or various forms of sin. Also, by saying that Jesus came to take away the sin of the ‘world’ implies that Jesus came for the whole world, and not just for the Jewish people… We are invited in our reading, as so poignantly depicted in our painting, to behold and hold the Lamb of God and embrace Jesus’ sacrifice for all of us.

A voice that cries in the wilderness

Jesus said to Nathanael ‘I saw you under the fi...

Nathaniel said ‘Can anything good come from tha...