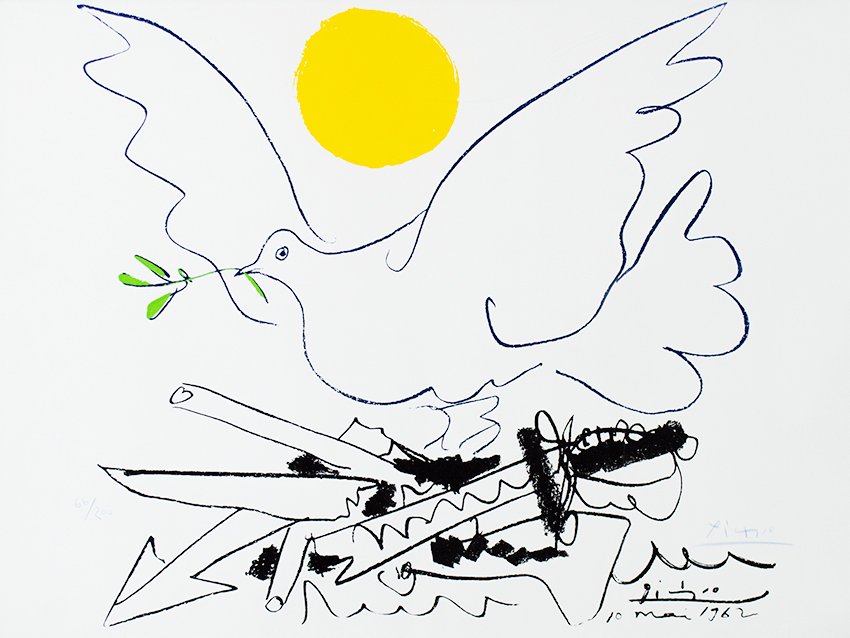 The Holy Spirit will teach you everything

‘Anybody who receives my commandments and keeps them will be one who loves me; and anybody who loves me will be loved by my Father, and I shall love him and show myself to him.’

Judas – this was not Judas Iscariot – said to him, ‘Lord, what is all this about? Do you intend to show yourself to us and not to the world?’

Jesus replied: ‘If anyone loves me he will keep my word, and my Father will love him, and we shall come to him and make our home with him. Those who do not love me do not keep my words. And my word is not my own: it is the word of the one who sent me. I have said these things to you while still with you;

but the Advocate, the Holy Spirit, whom the Father will send in my name, will teach you everything and remind you of all I have said to you.’

Reflection on the Lithograph

Throughout art history, the Holy Spirit has often been depicted as a dove, mainly based on the account of the Holy Spirit descending like a dove on Jesus at His baptism. The most classic depiction of this, apart from at Christ's baptism, is when the Holy Spirit is shown in the form of a dove coming down towards Mary on beams of light, as part of the Annunciation scenes. The dove, as a symbol for the Holy Spirit, then also further led to become a sign and symbol of peace. That dove of peace sits alongside the one that brought the olive branch to Noah after the deluge, as a symbol of peace, hence we see the dove here depicted with the green olive branch.

Here we see Pablo Picasso, one of the most celebrated artists of the 20th century, using the dove as a symbol of resilience and peace during times of combat, the dove ascending triumphantly above the violence of war symbolised by the messy, angular, sharp juxtaposition of branches. The dove is flying with its wings fully open, high above a bonfire of war. Peace triumphs war.

Picasso's first dove of peace, chosen as the emblem for the First International Peace Conference in Paris in 1949, was a traditional, realistic picture of a pigeon, which he continued to draw all throughout his life. The dove here is basically drawn by 4 simple lines (tail, left wing, right wing, body). He literally would have drawn this within the space of a few minutes. Picasso also named his fourth child 'Paloma', the Spanish word for 'dove'.

The Holy Spirit will teach you Everything

I am the Way, the Truth and the Life

My own peace I give you

A peace the world cannot give is my gift to you