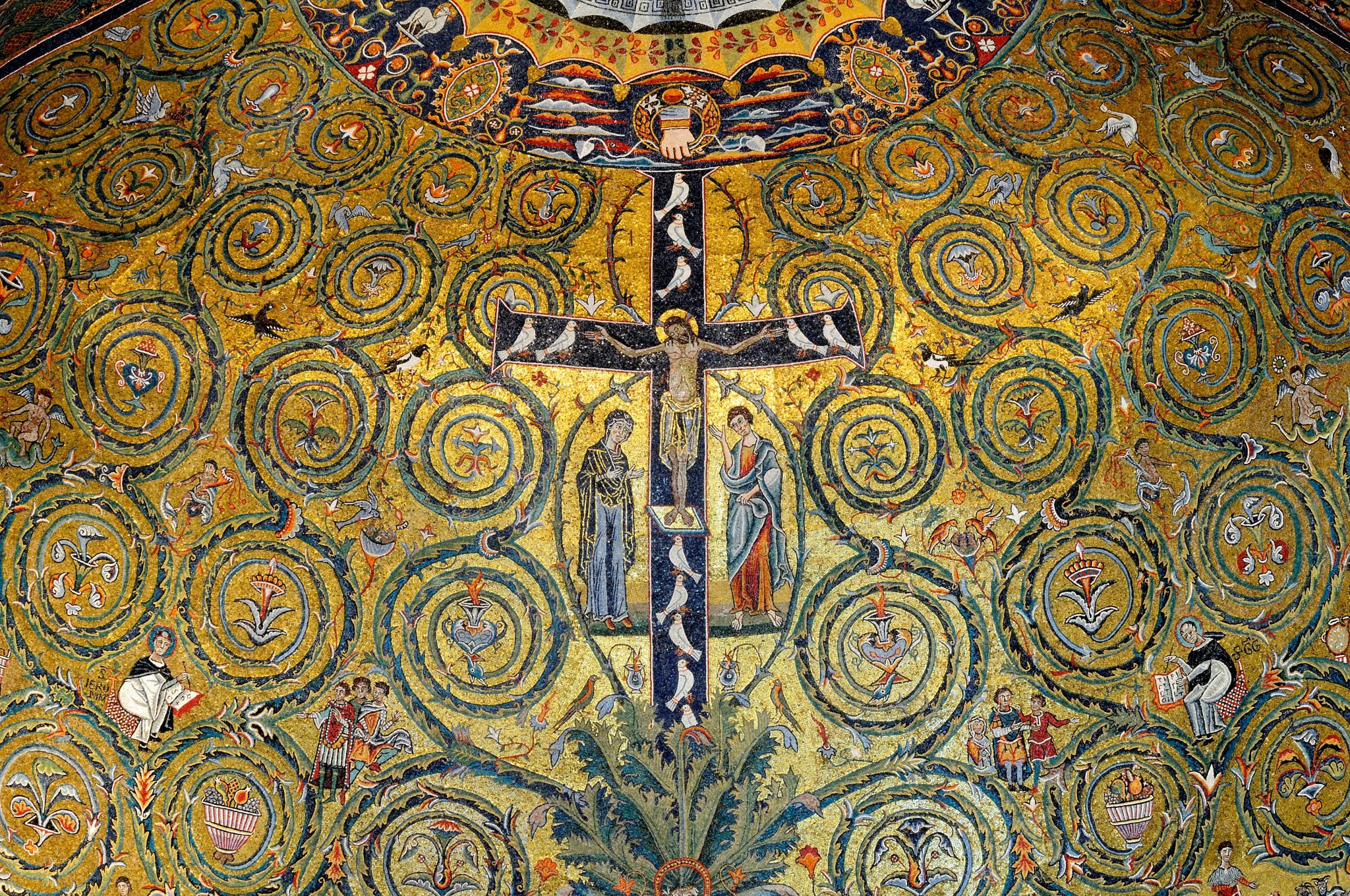 I am the True Vine,
Apse mosaic above the high altar, San Clemente, Rome (detail)
12th century,
With inscription: ECCLESIAM CRISTI VITI SIMILABIMUS ISTI  (We represent the Church of Christ as this vine)
© Alamy

I am the True Vine,
Apse mosaic above the high altar, San Clemente, Rome (detail)
12th century,
With inscription: ECCLESIAM CRISTI VITI SIMILABIMUS ISTI  (We represent the Church of Christ as this vine)
© Alamy

I am the vine, you are the branches

‘I am the true vine, and my Father is the vinedresser. Every branch in me that bears no fruit he cuts away, and every branch that does bear fruit he prunes to make it bear even more.

You are pruned already, by means of the word that I have spoken to you. Make your home in me, as I make mine in you. As a branch cannot bear fruit all by itself, but must remain part of the vine, neither can you unless you remain in me.

I am the vine, you are the branches. Whoever remains in me, with me in him, bears fruit in plenty; for cut off from me you can do nothing. Anyone who does not remain in me is like a branch that has been thrown away – he withers; these branches are collected and thrown on the fire, and they are burnt. If you remain in me and my words remain in you, you may ask what you will and you shall get it. It is to the glory of my Father that you should bear much fruit, and then you will be my disciples.’

Reflection on the apse mosaics

This mosaic was completed during the 12th century in the Basilica of San Clemente al Laterano in Rome. (Pope Saint Clement was the third pope after Saint Peter). The theme depicts the words of our Gospel reading today: 'I am the vine, you are the branches'.

We see at the very centre of the apse the crucified Christ with Mary his mother, and the apostle John. The cross is rooted in the acanthus plant from which his Church emanates. The Church with all its branches is shown growing out of the foot of the Cross. Christ sits in the middle of all these branches, surrounded by His Church.

At the very base of the Tree of Life, we see the four rivers of Eden emerge, and animals are drinking the life-giving water. They include deer, a reference to Psalm 42:2 ‘As the deer longs for streams of water, so my soul longs for you, O God'. This is another reference to the Church which, through its sacraments, nourishes the faithful. The branches of the vine are all connected to the one tree, so all of us human beings are connected to one another. To me the most beautiful element of thinking of our Church as a vine is that when a vine is alive, it wants to grow. A vine wants to live and produce fruit. That fruit nurtures us physically when we eat grapes, and it nurtures us spiritually when it is changed from wine into the blood of Christ  during the Eucharist.

The vine and the cross are growing out of an acanthus bush, which was an ancient Greek and Roman symbol for abundance and new life. The bottom frieze shows the Apostles as the twelve sheep, facing the central sheep which has a halo, which symbolises Jesus as the Lamb of God.

Jesus is the vine and we are called to be the fruitful branches that grow and reach out. These vine branches have the potential to grow to the peripheries of society... to reach out to those who have moved away from the Church. Maybe when they see the fruit we can bear as Christians, they may want to be nurtured too…

The mosaic and the scripture message are both beautiful and inspiring! Thank you for sharing!

Amazing mosaic. Love it. Just wondering why I have never been to this particular church…mind you, there are hundreds in Rome!

My Father is the vinedresser

I have told you this so that my own joy may be ...

I am the vine, you are the branches