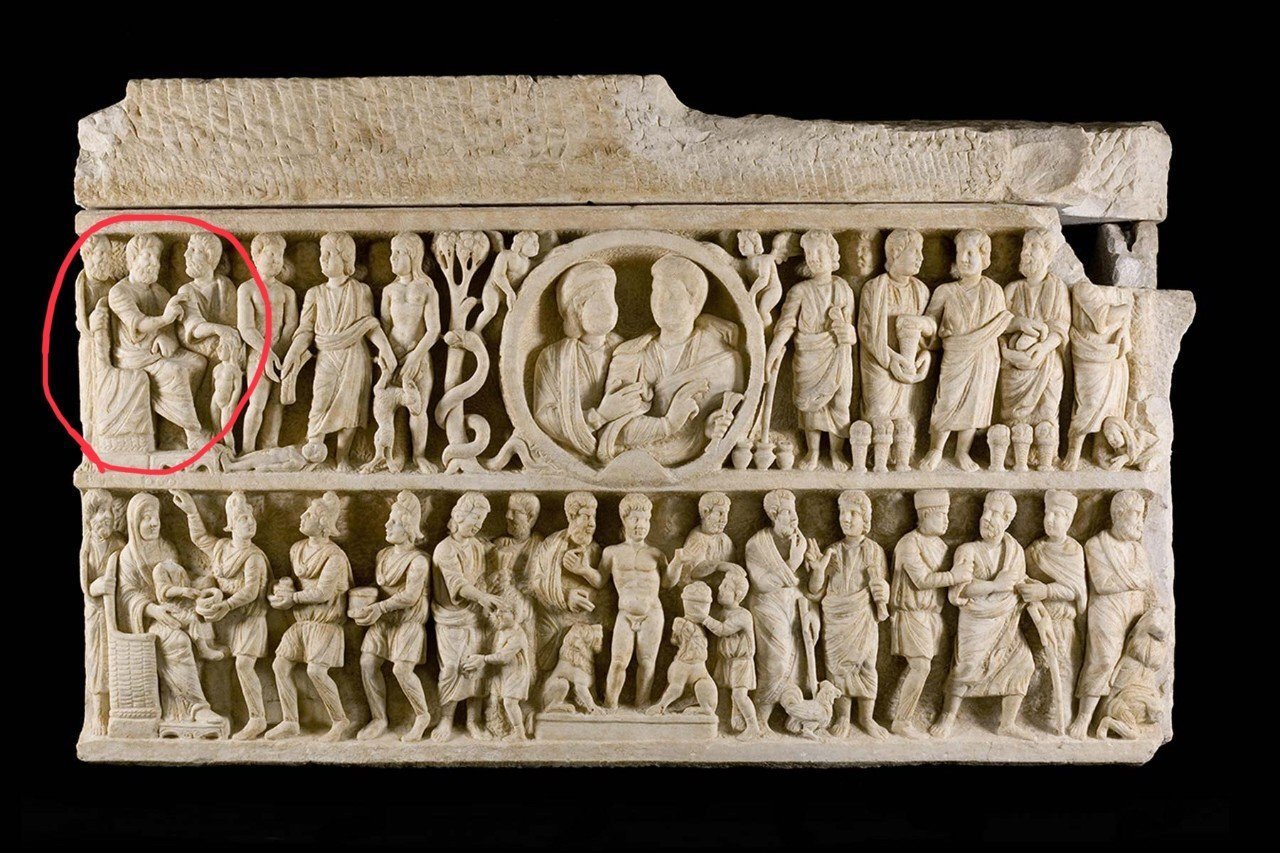 ‘I still have many things to say to you but they would be too much for you now.

Reflection on the Ancient Roman Sarcophagus

In today’s Gospel, Jesus foretells the coming of the Holy Spirit and in doing so gives us an insight into the Holy Trinity. The role of the Holy Spirit is to lead us to the complete truth and to glorify the Son. The Son in turn receives everything from the Father and so the Spirit helps us to hear the Father’s Word. Thus we are invited to reflect on this intimate communion of the Trinity.

In the early Church, art was used to help explain the mysteries of the Christian faith. This Dogmatic Sarcophagus, located in the Vatican and dated around 330AD, holds the very first depiction of the Trinity in art. After the Edict of Milan was signed by Constantine and Licinius in 313AD, Christianity was more readily tolerated in the Roman Empire and the Church grew stronger and was better able to express herself. The sarcophagus draws its name from its clear references to the dogmas of the Council of Nicea which took place in 325AD.

I have highlighted in red the top left corner of the sarcophagus, where the Trinity is depicted. Here we see what we believe to be the earliest known representation of God as a Trinity of persons. The central figure is most likely to be God the Father seated on a throne with a footstool under His feet. The Holy Spirit is seen standing behind him and we can see Jesus, who gazes directly into the eyes of His Father. The faces depicted all look exactly the same, further enhancing the fact all three of them are One. We see Christ looking to the Father and the Father radiating his love of the Son; we are drawn into the deeper realisation that the Father is in the Son and the Son is in the Father and the Trinity of love is complete by the Holy Spirit which binds this unity together.

The Trinity is an unbreakable love, and the gift of the Holy Spirit is given to us to draw us into the love of this Trinitarian mystery. Today we are called to profess our faith, not just as words but also in action. This demands placing our total trust in the Trinity and allowing the Holy Spirit to guide us, and so radiate God’s love to all... In this way we too will give glory to God....

Thanks for the combined moral and archeological lesson: a wonderful work of art with the wonder of the Trinity.

A very mysterious image. But then we are talking about a mystery! So who is the little figure then, upon whom Christ has placed his hand?

Pedantry alert! Is St Paul Outside the Walls in the Vatican as you say?
A most interesting piece of art. Did anyone see that programme about how the sacred art of Cambodia has been systematically looted over recent years and has ended up in Western museums?

Along with many others…a question of morality there.

Unless I go, the Advocate will not come to you

I still have many things to say to you

Your hearts will be full of joy