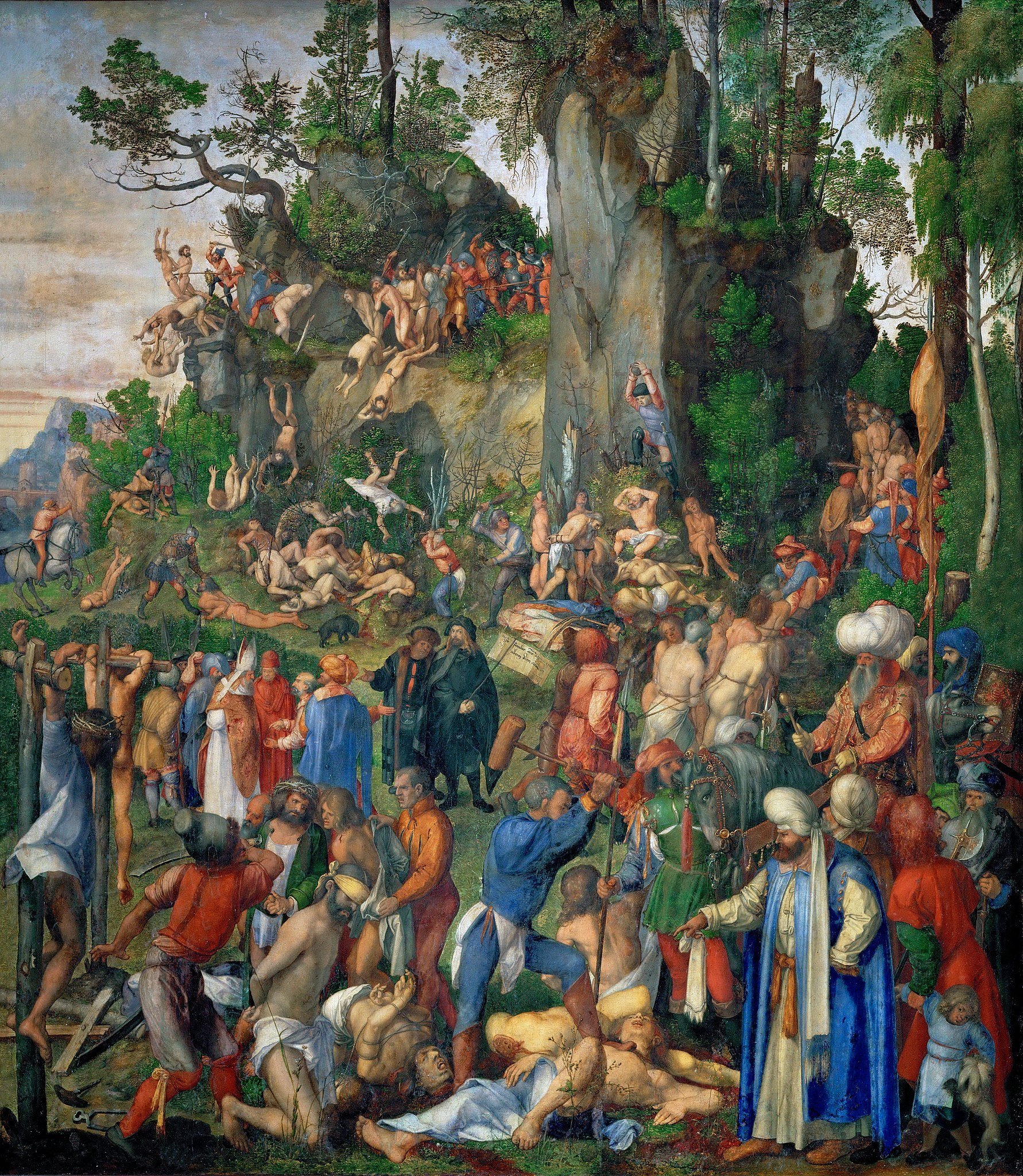 I passed your word on to them, and the world hated them

Jesus raised his eyes to heaven and said:

‘Holy Father, keep those you have given me true to your name, so that they may be one like us.

While I was with them, I kept those you had given me true to your name. I have watched over them and not one is lost except the one who chose to be lost, and this was to fulfil the scriptures. But now I am coming to you and while still in the world I say these things to share my joy with them to the full.

I passed your word on to them, and the world hated them,

Our painting by Albrecht Dürer depicts the legend of the ten thousand Christians who were martyred on Mount Ararat, in a massacre perpetrated by the Persian King Saporat on the command of the Roman Emperors Hadrian and Antonius Pius. The painting was commissioned by Frederick the Wise (1463-1525), Elector of Saxony, who owned relics from the massacre. This painting was placed in the relic chamber of his palace church in Wittenberg. Dürer's gruesome scene depicts scores of Christians meeting a violent death in a rocky landscape. Many horrendous ways of martyrdom are shown (crucifixions, decapitations, crushing with a hammer,, torture, stoning,…). The oriental potentate in the blue cloak and the Persian King on his horse are portrayed as directing all the killings. In Dürer's time the viewers would have perceived these figures as a reference to the threat of Turkish invasion, because of the seizure of Constantinople in 1453. Most executioners are also wearing Ottoman dress. In the centre of the painting is the rather incongruous figure of the artist, holding a staff with the inscription: 'This work was done in the year 1508 by Albrecht Dürer, German.’

Martyrdom is one of the elements that Jesus foretells in our Gospel reading today. As Jesus spoke these words before his Passion, he knew that the disciples were about to be scattered. He knew that, scattered and alone, proclaiming the good news in all corners of the world, they would face resistance, mockery, unbelief and even martyrdom. Silence would have saved them from certain martyrdom. Jesus foretold that the 'world would hate them’.

In their moments of martyrdom, the disciples must have remembered these  words of Jesus. Today is also the feast of Saint Justin Martyr. In his quest for speaking the truth, he was beheaded in 165AD during the reign of Marcus Aurelius.

‘The Great Persecution’ certainly fits this scene.
Durer had a huge ego, didn’t he? Good… but he knew it! His rocks and trees are wonderful.

I never knew that story. I wonder if it truthfully happened. We are so lucky to live now in the Western world which, of course, is a big reason so many are abandoning Christianity.

I have sent them into the world

Jesus raised his eyes to heaven and said

Father, may they be completely one

Father, may they all be one