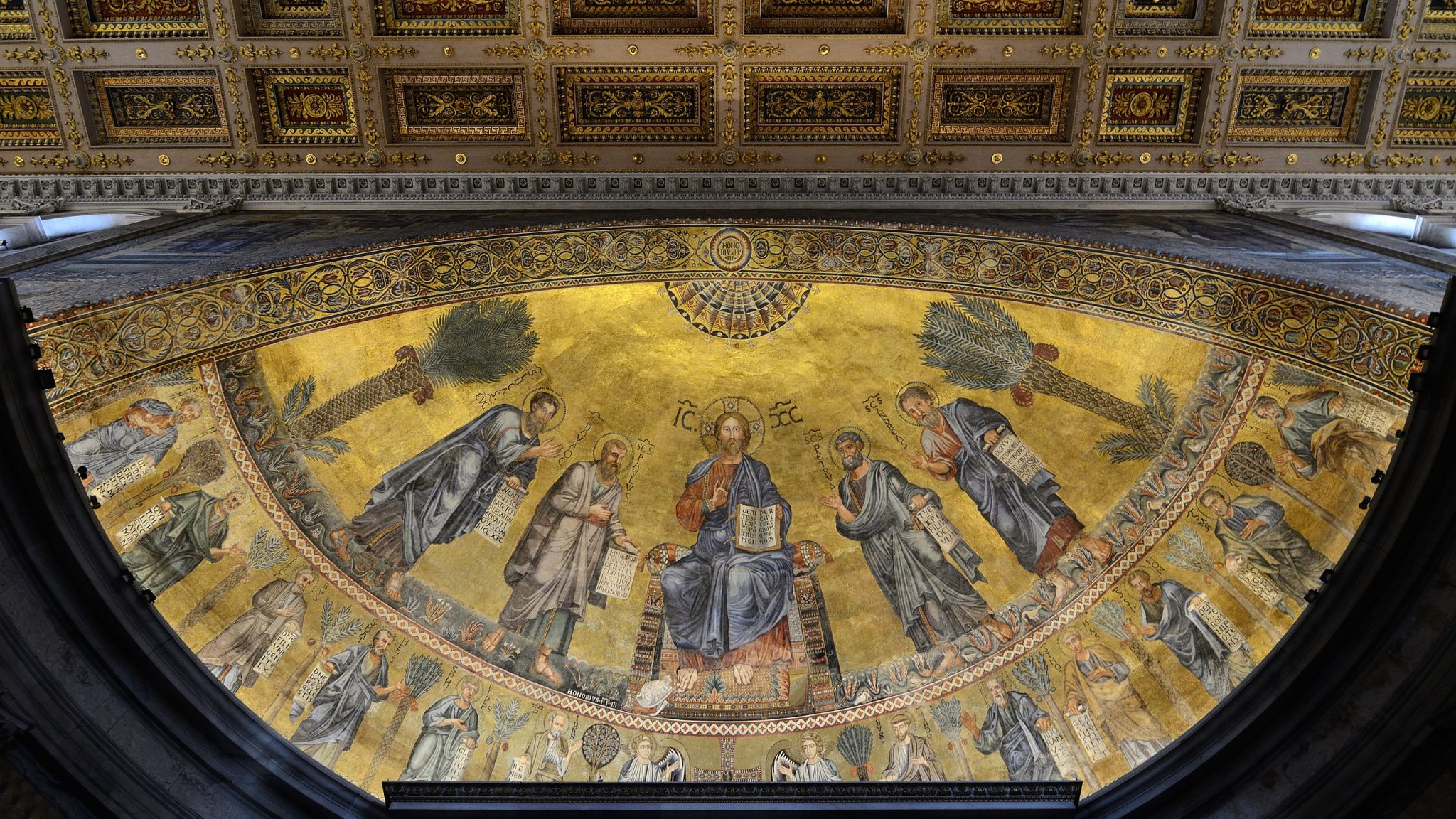 ‘Are you the king of the Jews?’ Pilate asked.

'Are you the king of the Jews?' Pilate asked. Jesus replied, 'Do you ask this of your own accord, or have others spoken to you about me?' Pilate answered, 'Am I a Jew? It is your own people and the chief priests who have handed you over to me: what have you done?' Jesus replied, 'Mine is not a kingdom of this world; if my kingdom were of this world, my men would have fought to prevent my being surrendered to the Jews. But my kingdom is not of this kind.' 'So you are a king then?' said Pilate. 'It is you who say it' answered Jesus. 'Yes, I am a king. I was born for this, I came into the world for this: to bear witness to the truth; and all who are on the side of truth listen to my voice.'

Reflection on the Apse Mosaic

Staying with the Basilica of St Paul's Outside the Walls, Rome, which we looked at two days ago, we are today looking at the 13th-century apse mosaic. It depicts Christ Pantocrator in a kingly position on his throne. We see Christ as a mild but stern looking, all-powerful judge of humanity. He is holding a book holding the words 'VENITE BENEDICTI PATRIS MEI | PERCIPITE REGNUM Q[UOD] V[OBIS] P[REPARATUM] A[B] O[RIGINE] M[UNDI], "Come, you blessed of my Father, accept the kingdom prepared for you since the beginning of the world" (Matthew 25:34). Christ is flanked on the left by St. Luke and St. Paul; on the right by St. Peter and St. Andrew. Each is identified by an inscription in Latin. But let's look a bit more closely at the very small white clothed figure bowing at Christ's right foot:  Pope Honorius III, who ordered the mosaic during the early 13th century.

Pope Paul VI referred to this image during his first address to the Bishops taking part in the Second Vatican Council on 29 September 1963: "The radiant royal majesty of Jesus emerges in the Pantocrator, just like in your Basilicas, Our Venerable Brethren of the Eastern and Western Churches. And we recognise ourselves in the figure of Our Predecessor, Honorius III, in the magnificent mosaic of Saint Paul Outside-the-Walls, represented in adoration before Christ, a tiny figure bowed down to kiss Christ's feet who, in His Greatness, is presiding over the assembly gathered in the Basilica, that is the Church". Pope Paul VI said that we should all be like the small figure of Pope Honorius, bowing at the kingly majesty of Christ.

Today we celebrate the Solemnity of Christ the King. It is also the end of our Liturgical Year. Over the past year we have re-lived the life of Christ and His apostles, through all the joys and sufferings. So, is Christ more king today in my life than He was a year ago? Is he reigning in my heart more than before? Have we let Him establish His kingdom of justice , hope, peace and love in our hearts? With the start of Advent next week, our Church will invite us to start another Liturgical Year together. It is an invitation to relive the rhythm of the Christ's life, in order to help us walk towards a deeper encounter with the Lord. But now we are called to walk through this last week of the Liturgical Year and reflect on the Kingship of Jesus Christ….

The Passion of our Lord Jesus Christ