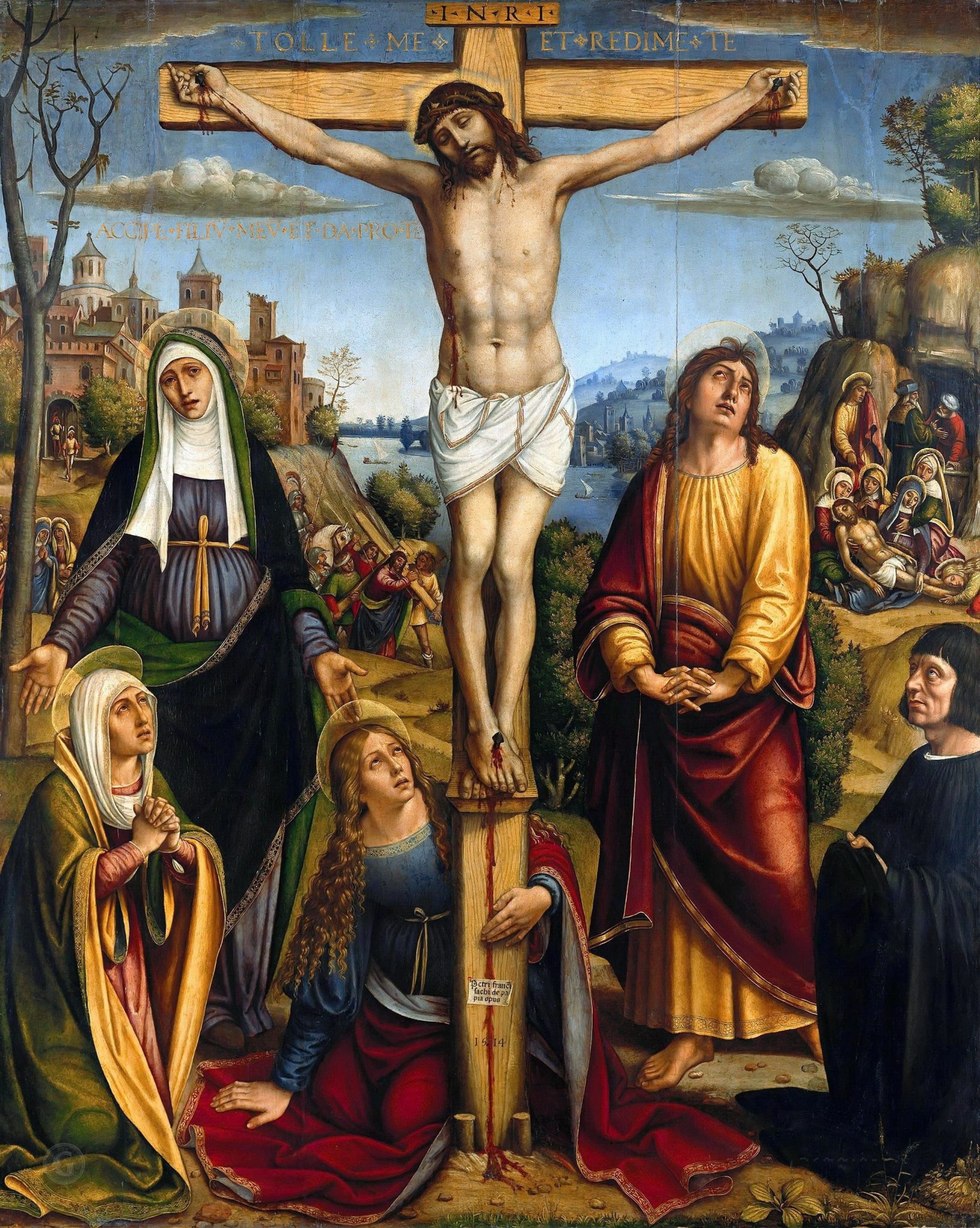 Christ on the Cross, mourned by the three Marys, St. John and a donor,
Painting by Pier Francesco Sacchi (1485-1528),
Painted in 1514,
Oil on panel
© Gemaldegalerie, Berlin

Christ on the Cross, mourned by the three Marys, St. John and a donor,
Painting by Pier Francesco Sacchi (1485-1528),
Painted in 1514,
Oil on panel
© Gemaldegalerie, Berlin

Near the cross of Jesus stood the three Marys

After this, Jesus knew that everything had now been completed, and to fulfil the scripture perfectly he said, 'I am thirsty.'

A jar full of vinegar stood there, so putting a sponge soaked in the vinegar on a hyssop stick they held it up to his mouth. After Jesus had taken the vinegar he said, 'It is accomplished'; and bowing his head he gave up his spirit.

It was Preparation Day, and to prevent the bodies remaining on the cross during the sabbath – since that sabbath was a day of special solemnity – the Jews asked Pilate to have the legs broken and the bodies taken away. Consequently the soldiers came and broke the legs of the first man who had been crucified with him and then of the other. When they came to Jesus, they found he was already dead, and so instead of breaking his legs one of the soldiers pierced his side with a lance; and immediately there came out blood and water.

'Near the cross of Jesus stood his mother and his mother's sister, Mary the wife of Clopas, and Mary of Magdala'. Our reading starts with St John sharing the presence of the three Marys at the crucifixion. All three are depicted in our painting by Sacchi, to the left side of the cross. It is interesting that there were three women, all called Mary, at the foot of the cross.

They may have shared the same name, but they all got to the foot of the cross in very different ways. Our Lady was there because of a direct call from God. Through the Angel Gabriel, God asked her to participate in His divine plan. After her 'yes', Mary became the Mother of Christ, and today we celebrate her as Mary Mother of the Church. The second Mary, wife of Cleopas (and sister of Our Lady), was there to console her family. She was there to support her sister in enduring the death of her Son. And then there is Mary Magdalen, who was there not because she was related or family, but because of the friendship she had with Jesus. She was there through the mercy and love of Christ Himself.

The Stations of the Cross - Station 1: Jesus is...

The Stations of the Cross - Station 4: Jesus me...