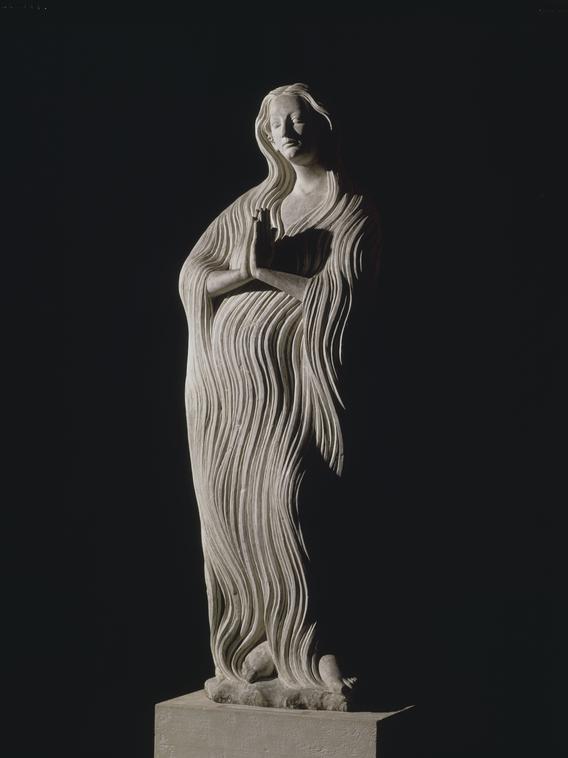 It was very early on the first day of the week and still dark, when Mary of Magdala came to the tomb. She saw that the stone had been moved away from the tomb and came running to Simon Peter and the other disciple, the one Jesus loved. 'They have taken the Lord out of the tomb' she said 'and we don't know where they have put him.'

Meanwhile Mary stayed outside near the tomb, weeping. Then, still weeping, she stooped to look inside, and saw two angels in white sitting where the body of Jesus had been, one at the head, the other at the feet. They said, 'Woman, why are you weeping?' 'They have taken my Lord away' she replied 'and I don't know where they have put him.' As she said this she turned round and saw Jesus standing there, though she did not recognise him. Jesus said, 'Woman, why are you weeping? Who are you looking for?' Supposing him to be the gardener, she said, 'Sir, if you have taken him away, tell me where you have put him, and I will go and remove him.' Jesus said, 'Mary!' She knew him then and said to him in Hebrew, 'Rabbuni!' – which means Master. Jesus said to her, 'Do not cling to me, because I have not yet ascended to the Father. But go and find the brothers, and tell them: I am ascending to my Father and your Father, to my God and your God.' So Mary of Magdala went and told the disciples that she had seen the Lord and that he had said these things to her.

Reflection on the Gothic Sculpture

Today we celebrate the Feast of Saint Mary Magdalen. Our beautiful carved limestone sculpture dates from around 1313. It looks so modern, though. I saw this sculpture only once, about 20 years ago, and it stayed with me. The sinuous lines and waved texture is almost reminiscent of the Art Nouveau style, but this is an early 14th-century sculpture!

It is has been hard for artists over the years to portray Mary Magdalen. Either she gets portrayed as a saint or as a sinner. Of all the saints mentioned in the Gospel readings, she is probably the most adaptable and versatile of figures for artists to depict. Tales and legends even beyond scripture have turned her into a figure that has fascinated artists throughout art history, leading to her being portrayed as a saint, labelled as a sinner, condemned a prostitute, even up to the point of her being reimagined as Jesus' wife. She has been an enigmatic figure for artists. This is the reason why our Gothic sculpture is so unusual. The artist felt he could approach the subject of Mary Magdalen in a uniquely creative way.

She was first and foremost a friend, a disciple and a witness to Christ. She was there during Jesus' ministry; she was there at the foot of the cross; she prepared Jesus' body for burial; she discovered the empty tomb; she was the first person to speak to Jesus after the Resurrection… She was Jesus' most loyal follower. It is this loyalty we celebrate today on her feast day. As Cicero said: 'Nothing is more noble, nothing more venerable than loyalty'.

John, the other disciple, the one Jesus loved

The Feast of Pentecost