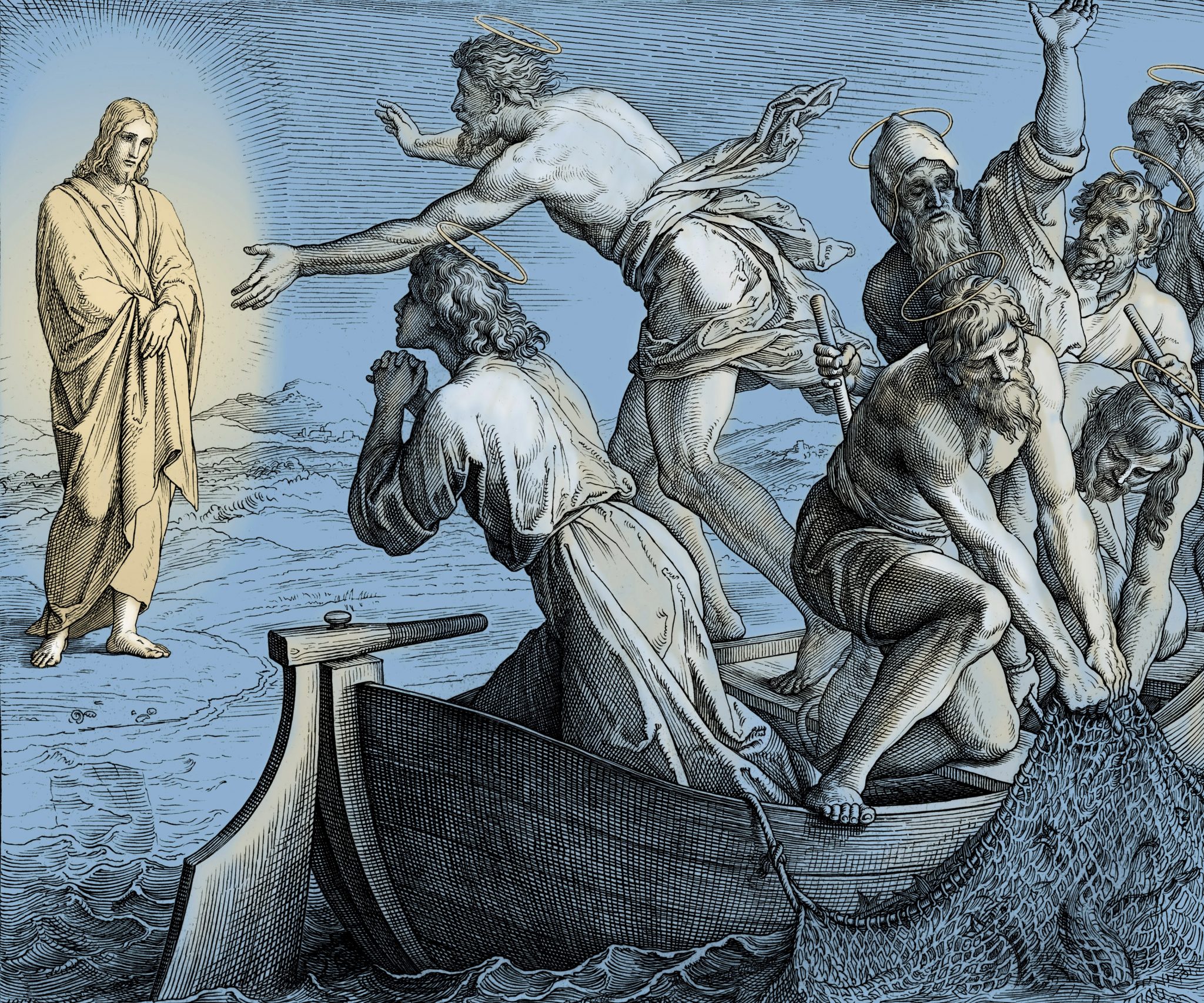 Jesus appears to his disciples at the Sea of Tiberias,
Illustration from Die Bibel in Bildern,
Engraving by Julius Schnorr von Carolsfeld (1794-1872),
Issued in 1853,
Coloured chromolithograph
© Alamy / Christian Art

Jesus appears to his disciples at the Sea of Tiberias,
Illustration from Die Bibel in Bildern,
Engraving by Julius Schnorr von Carolsfeld (1794-1872),
Issued in 1853,
Coloured chromolithograph
© Alamy / Christian Art

At these words ‘It is the Lord’, Simon Peter jumped into the water

Jesus showed himself again to the disciples. It was by the Sea of Tiberias, and it happened like this: Simon Peter, Thomas called the Twin, Nathanael from Cana in Galilee, the sons of Zebedee and two more of his disciples were together. Simon Peter said, ‘I’m going fishing.’ They replied, ‘We’ll come with you.’ They went out and got into the boat but caught nothing that night.

It was light by now and there stood Jesus on the shore, though the disciples did not realise that it was Jesus. Jesus called out, ‘Have you caught anything, friends?’ And when they answered, ‘No’, he said, ‘Throw the net out to starboard and you’ll find something.’ So they dropped the net, and there were so many fish that they could not haul it in. The disciple Jesus loved said to Peter, ‘It is the Lord.’ At these words ‘It is the Lord’, Simon Peter, who had practically nothing on, wrapped his cloak round him and jumped into the water. The other disciples came on in the boat, towing the net and the fish; they were only about a hundred yards from land.

As soon as they came ashore they saw that there was some bread there, and a charcoal fire with fish cooking on it. Jesus said, ‘Bring some of the fish you have just caught.’ Simon Peter went aboard and dragged the net to the shore, full of big fish, one hundred and fifty-three of them; and in spite of there being so many the net was not broken. Jesus said to them, ‘Come and have breakfast.’ None of the disciples was bold enough to ask, ‘Who are you?’; they knew quite well it was the Lord. Jesus then stepped forward, took the bread and gave it to them, and the same with the fish. This was the third time that Jesus showed himself to the disciples after rising from the dead.

Reflection on the Engraving

Our mid 19th century engraving by Julius Schnorr von Carolsfeld  depicts the moment in our gospel reading when ‘Simon Peter, who had practically nothing on, wrapped his cloak round him and jumped into the water’. We see Jesus depicted as the source of light, standing on the shore of the Sea of Tiberias. John and Peter have just noticed Jesus, and their expressions convey the surprise and joy in seeing him. The other disciples are on the other side of the boat, barely managing to haul in the abundant fish they caught.

Today’s gospel reading gives us comfort. If even the disciples who for years were so close to Jesus and followed him everywhere, did not recognise him, then we surely can’t recognise Jesus easily too. Or can we? There are so many strangers on the shore in our lives: people we have encountered but in whom we didn’t see Jesus. Maybe it will take someone like John the beloved disciple to point out the Lord to us. Look what an effect that had: Peter jumped in half-naked into the sea to get close to Christ.

Simon Peter was not the first disciple to recognise Jesus. However, he was the first to respond! Our engraving so beautifully conveys the spontaneity and immediacy of his response.

Wasn’t this man a Wagnerian singer as well?

I don’t think I have read this passage closely enough until now. Jesus, fully God and fully man, triumphant over sin and death, starts a fire, prepares bread and fish, and serves His friends a meal. Jesus’ outward appearance may have changed; but He is still the same Jesus who washed His friends’ feet.

After the resurrection, Jesus must have been outwardly changed – in fact, how could He be the same? Yet, it’s in His words and the breaking of bread that they know it’s Him. I love this gospel and the little details, like the number of fish.

Simon Peter jumped into the water

Feed my lambs, feed my sheep