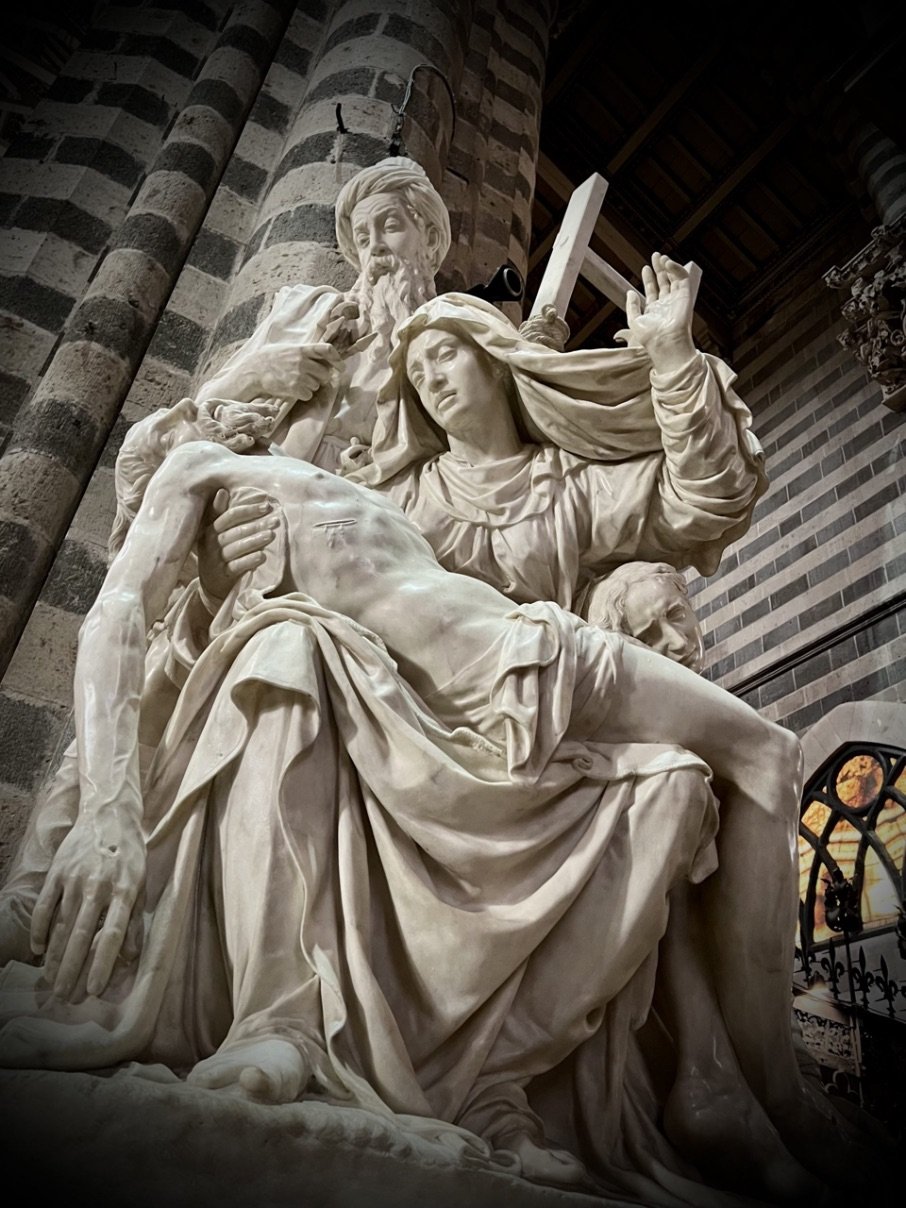 ‘God loved the world so much that he gave his only Son,

so that everyone who believes in him may not be lost

but may have eternal life.

For God sent his Son into the world

not to condemn the world,

but so that through him the world might be saved.

No one who believes in him will be condemned;

but whoever refuses to believe is condemned already,

because he has refused to believe in the name of God’s only Son.

On these grounds is sentence pronounced:

that though the light has come into the world

men have shown they prefer darkness to the light

because their deeds were evil.

And indeed, everybody who does wrong

hates the light and avoids it,

for fear his actions should be exposed;

but the man who lives by the truth comes out into the light,

so that it may be plainly seen that what he does is done in God.’

Reflection on the Sculpture

I recently saw this sculpture again at the Duomo in Orvieto. Sculpted in 1579 by local artist Ippolito Scalza, the group depicts Our Lady holding the body of her son in her lap, with Saint Nicodemus standing to her right and Mary Magdalene mourning at her left. It is a sculpture of sheer beauty. The veins on Christ’s arms, the bleeding wound caused by the lance, Our Lady’s gentle expression, the sorrow of Mary Magdalene, all make for an exquisite sculpture. And then we have Nicodemus at the back, holding the ladder in his left hand and the crucifixion nails in his right hand, together with pliers. He has just helped Mary take down the body of her son from the cross.

Nicodemus is mentioned only in the Gospel of John, not in the other three gospels. He must have been a man of means, as he brought a mixture of myrrh and aloes in large quantities to embalm Jesus. Pope Benedict XVI in his book Jesus of Nazareth, Holy Week observes that "The quantity of the balm Nicodemus brought is extraordinary and exceeds all normal proportions. This is a royal burial”.

But in today’s reading, we hear Jesus speak the most beautiful words to Nicodemus. Jesus paints a picture of God that is just so loving and majestically paternal. It tells of God’s love for the world, of God’s generous way of expressing his love by giving the world his only Son and of the Father’s wish that all people would experience eternal life through receiving God’s Son in faith.

The Feast of the Exaltation of the Holy Cross

Nicodemus came to Jesus by night

The Father loves the Son