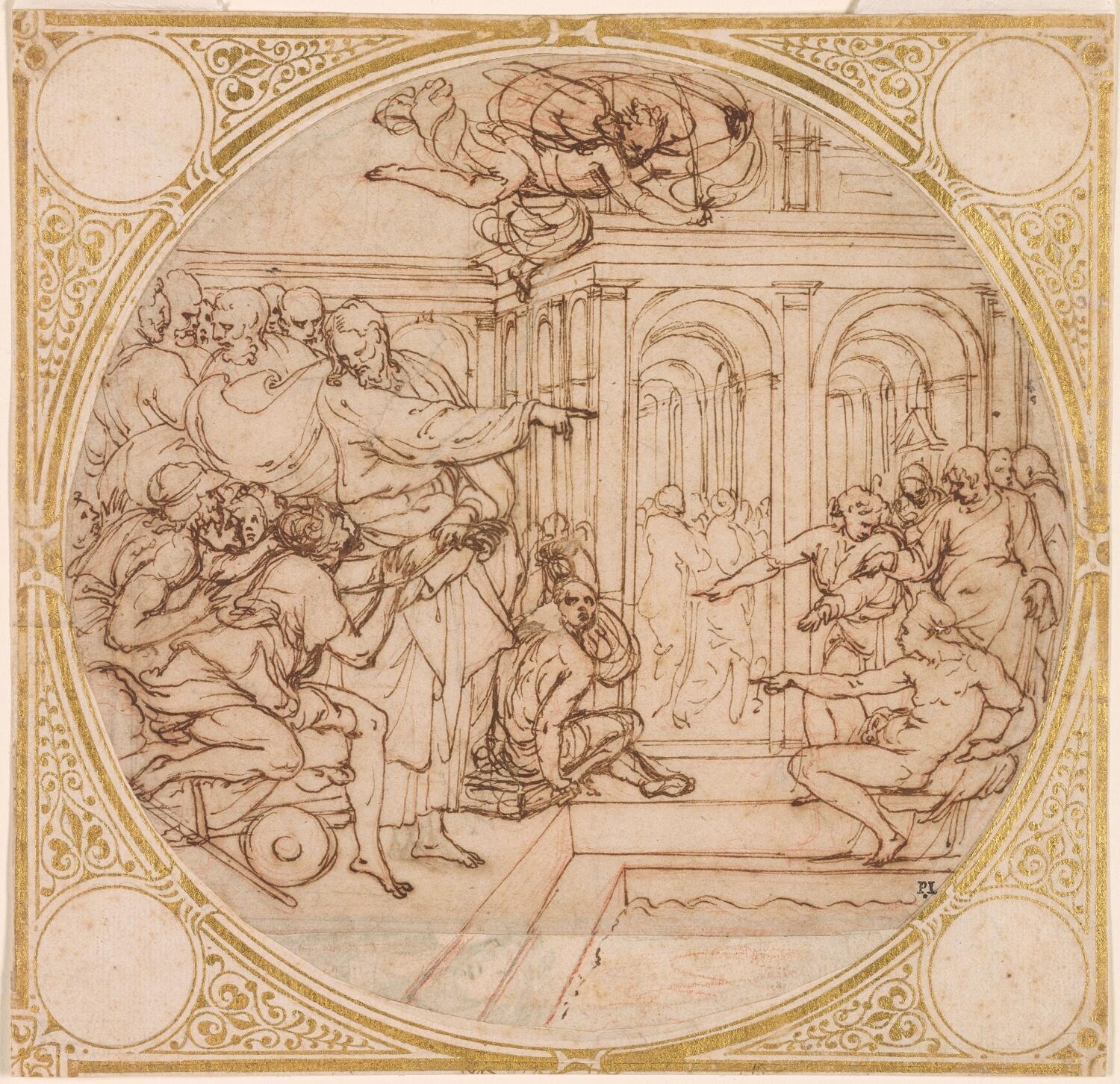 There was a Jewish festival, and Jesus went up to Jerusalem. Now at the Sheep Pool in Jerusalem there is a building, called Bethzatha in Hebrew, consisting of five porticos; and under these were crowds of sick people – blind, lame, paralysed – waiting for the water to move. One man there had an illness which had lasted thirty-eight years, and when Jesus saw him lying there and knew he had been in this condition for a long time, he said, ‘Do you want to be well again?’ ‘Sir,’ replied the sick man ‘I have no one to put me into the pool when the water is disturbed; and while I am still on the way, someone else gets there before me.’ Jesus said, ‘Get up, pick up your sleeping-mat and walk.’ The man was cured at once, and he picked up his mat and walked away.

Now that day happened to be the sabbath, so the Jews said to the man who had been cured, ‘It is the sabbath; you are not allowed to carry your sleeping-mat.’ He replied, ‘But the man who cured me told me, “Pick up your mat and walk.”’ They asked, ‘Who is the man who said to you, “Pick up your mat and walk”?’ The man had no idea who it was, since Jesus had disappeared into the crowd that filled the place. After a while Jesus met him in the Temple and said, ‘Now you are well again, be sure not to sin any more, or something worse may happen to you.’ The man went back and told the Jews that it was Jesus who had cured him. It was because he did things like this on the sabbath that the Jews began to persecute Jesus.

Reflection on the Drawing

Our drawing from 1538 by Perino del Vaga depicts the moment Christ encourages the lame man to rise and consider himself healed. We see the rolled up mat underneath the man. Our Gospel reading tells us that he will now pick up his mat and walk away. We see an angel who was said to stir up the healing waters in the pool, floating at top of our drawing. Our Gospel reading tells us how the blind, lame, paralysed were all waiting for the waters to move. Born in Florence, Perino del Vaga moved to Rome where he quickly joined Raphael’s workshop, becoming, with Giulio Romano, arguably the most important artist to emerge from the master’s circle.

The question that Jesus is asking the lame man appears to be slightly odd: ‘Do you want to be well again?’ The man had been coming to the temple for thirty-eight years, so surely it would be very obvious that he wanted to be healed. Yet Jesus asks the very question. He did not only already know what was in the man’s heart, but He wanted the man to reflect on what he truly wanted in the depths of his heart. So what is it that we really really want in the depths of our own hearts?

The reading is further slightly odd, as the lame man, when being asked the question, doesn’t simply respond ‘yes, I want to be healed’. No, he complains of his situation (understandably so). Plus, after being healed he just picks up his mat and walk away. We don’t hear him jumping for joy or praising Jesus after being healed. Maybe he wasn’t the most thankful of people after having been healed. Maybe portraying the lame man as complaining and being ungrateful may be an ungenerous thing to say, but it certainly merits reflecting upon, especially during this time of Lent where we are called to look into the depths of our own hearts. Are we truly grateful for all we have received?…

Hmm..yes, I’m guilty of just picking up my mat and walking away when Our Lord answers my prayer.
Thanks be to God should always be in our lips.

One wonders why Jesus only cured one man?

Your accuser is Moses, on whom you have set you...