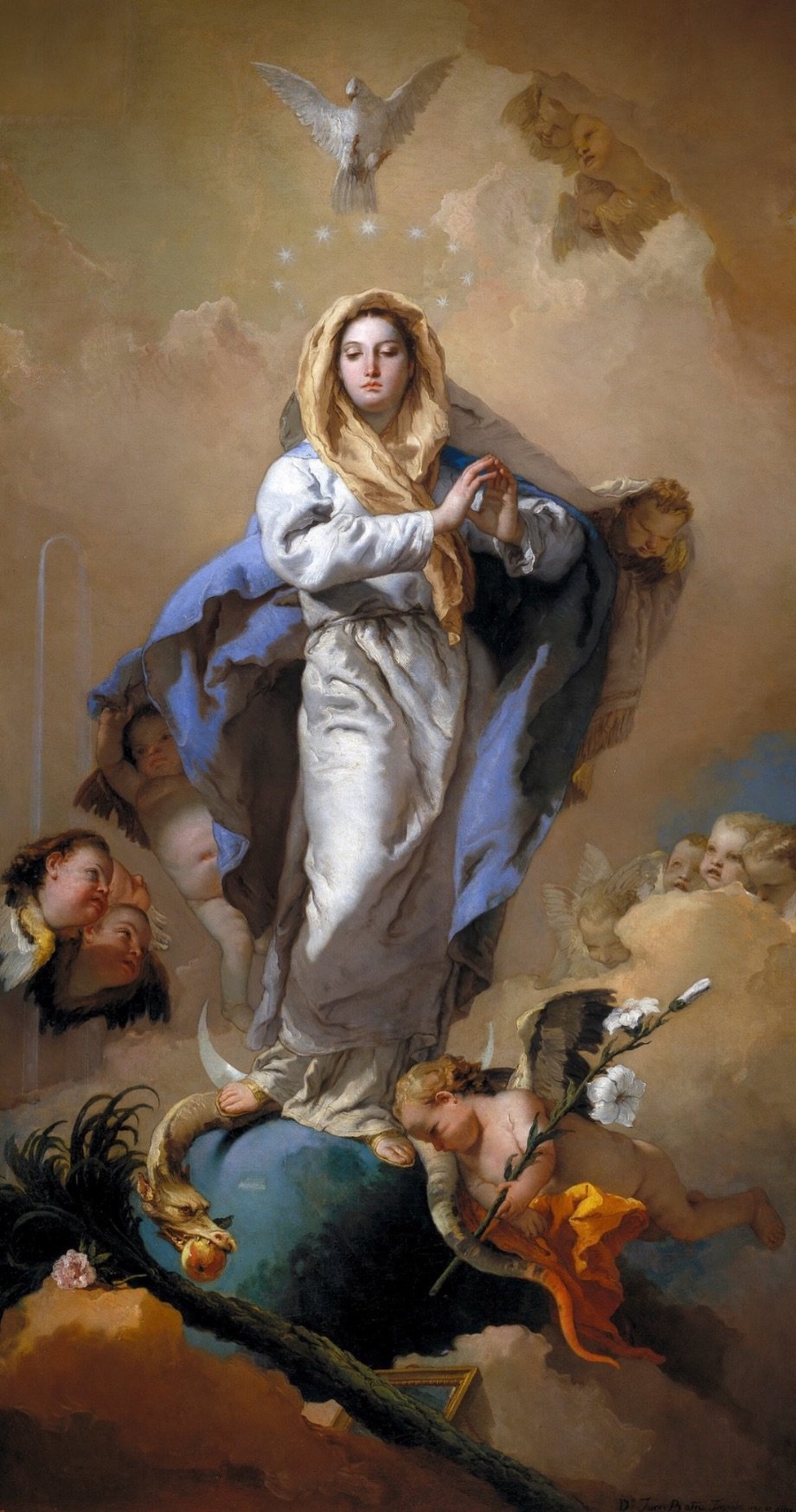 Feast Day of Immaculate Conception of Our Lady

The angel Gabriel was sent by God to a town in Galilee called Nazareth, to a virgin betrothed to a man named Joseph, of the House of David; and the virgin’s name was Mary. He went in and said to her, ‘Rejoice, so highly favoured! The Lord is with you.’ She was deeply disturbed by these words and asked herself what this greeting could mean, but the angel said to her, ‘Mary, do not be afraid; you have won God’s favour. Listen! You are to conceive and bear a son, and you must name him Jesus. He will be great and will be called Son of the Most High. The Lord God will give him the throne of his ancestor David; he will rule over the House of Jacob for ever and his reign will have no end.’ Mary said to the angel, ‘But how can this come about, since I am a virgin?’ ‘The Holy Spirit will come upon you’ the angel answered ‘and the power of the Most High will cover you with its shadow. And so the child will be holy and will be called Son of God. Know this too: your kinswoman Elizabeth has, in her old age, herself conceived a son, and she whom people called barren is now in her sixth month, for nothing is impossible to God.’ ‘I am the handmaid of the Lord,’ said Mary ‘let what you have said be done to me.’ And the angel left her.

Today, we celebrate and commemorate the Feast of the Immaculate Conception of Our Lady (one day later than usual, as Advent Sunday was yesterday). From the moment of her conception, Mary was given the divine grace not only of freedom from original sin, but of being the only human being other than her Divine Son who lived a life without sin. From the beginning of Christianity, the early Fathers of the Church held a special devotion to Mary because they understood that without Mary salvation would never have happened.

The Church teaches that the Blessed Mother was given this very special Grace of liberation from the effects of sin in part because she would be the Mother of God and so would bear the second person of the Blessed Trinity in her womb for nine months. So today is a day to reflect on her greatness and her role in helping us on our journey to God. We celebrate her uniqueness and unique role by fully cooperating with God.

In 2015, Pope Francis on this same feast day said: “The Virgin Mary was called to rejoice above all because of what the Lord accomplished in her. God’s grace enfolded her and made her worthy of becoming the Mother of Christ. When Gabriel entered her home, even the most profound and impenetrable of mysteries became for her a cause for joy, faith and abandonment to the message revealed to her. The fullness of grace can transform the human heart and enable it to do something so great as to change the course of human history”.

Feast of the Assumption of Mary

The Song of Zechariah

The Almighty has done great things for me

Feast of the Assumption of the Virgin Mary