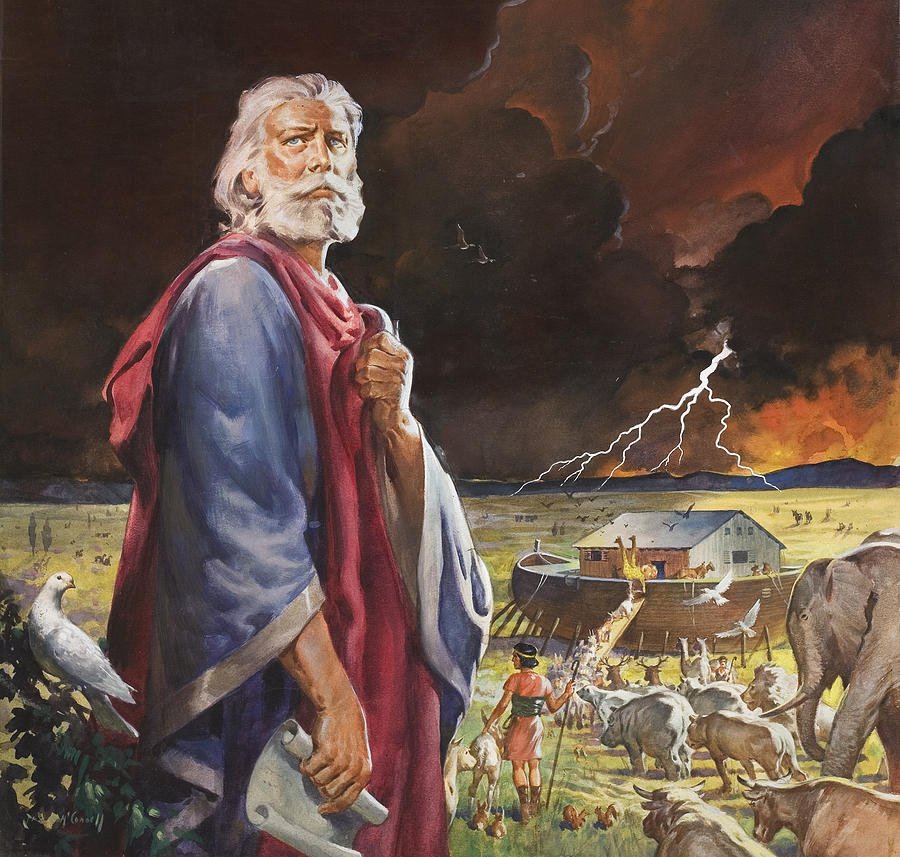 As it was in Noah’s day

‘When that day comes, anyone on the housetop, with his possessions in the house, must not come down to collect them, nor must anyone in the fields turn back either. Remember Lot’s wife. Anyone who tries to preserve his life will lose it; and anyone who loses it will keep it safe. I tell you, on that night two will be in one bed: one will be taken, the other left; two women will be grinding corn together: one will be taken, the other left.’ The disciples interrupted. ‘Where, Lord?’ they asked. He said, ‘Where the body is, there too will the vultures gather.’

Reflection on the Gouache on Paper

When we hear about the whole list of human activity described in today’s Gospel reading (eating and drinking, marrying wives and husbands, buying and selling, planting and building etc…), our times certainly don’t sound very different than Noah’s times. We do lead busy lives as well, where many distractions are possible and very much part of our daily reality. However, Jesus invites us to concentrate on what is important: Our Good Lord! Deciding wether or not to serve Him cannot be something that we ponder over indefinetely. We have to make and take decisions and serving God should sit on top of the list.

So there is a great sense of urgency in serving God and steering everything we do in life towards Him. It is simple really: if we are distracted in our faith, we will become separated from God. Also, we won’t be able to bring other people along our journey to bring them (back) to the faith. In that sense it is a bit like driving a car: no-one wants to sit in a car where there is a distracted driver at the helm. You wouldn’t only not arrive at the right destination, but it would be dangerous to sit along such a driver…

The illustration by James E. McConnell shows Noah in front of his ark, with plenty of activity going on behind him… plenty of distractions… McConnell’s early freelance work was in advertising and designing book covers, especially for the paper back book market which was thriving after the Second World War. Today’s Gospel reading is meant to break through our complacency and prompt us to keep searching for Christ, hopefully without too many distractions…

We are merely servants

If your brother does something wrong, reprove him

We are merely servants

Reflection on the Watercolour on Paper

Along the border between Samaria and Galilee