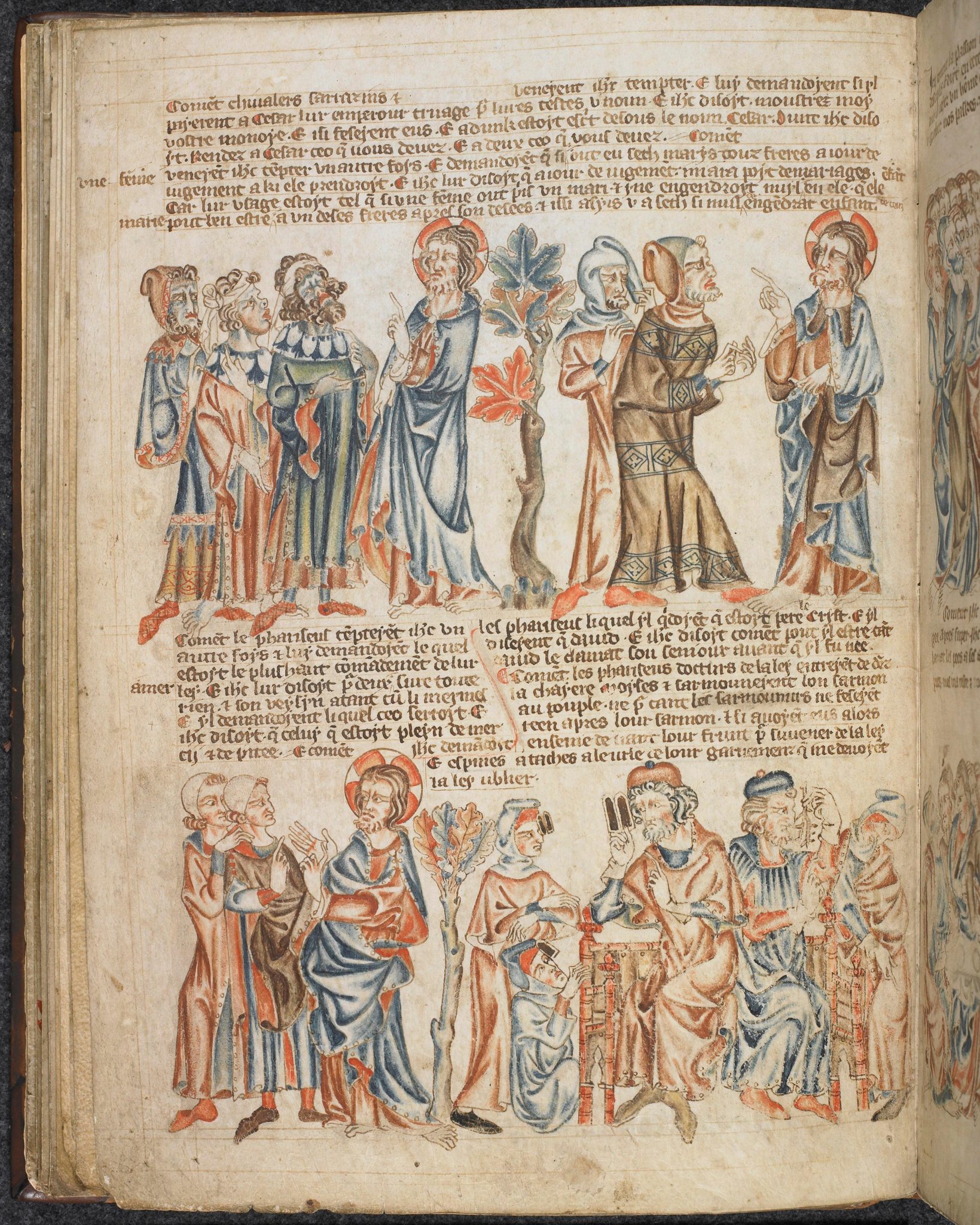 The Sadducees - those who say that there is no Resurrection

Some Sadducees – those who say that there is no resurrection – approached Jesus and they put this question to him, 'Master, we have it from Moses in writing, that if a man's married brother dies childless, the man must marry the widow to raise up children for his brother. Well then, there were seven brothers. The first, having married a wife, died childless. The second and then the third married the widow. And the same with all seven, they died leaving no children. Finally the woman herself died. Now, at the resurrection, to which of them will she be wife since she had been married to all seven?'

Jesus replied, 'The children of this world take wives and husbands, but those who are judged worthy of a place in the other world and in the resurrection from the dead do not marry because they can no longer die, for they are the same as the angels, and being children of the resurrection they are sons of God. And Moses himself implies that the dead rise again, in the passage about the bush where he calls the Lord the God of Abraham, the God of Isaac and the God of Jacob. Now he is God, not of the dead, but of the living; for to him all men are in fact alive.'

Some scribes then spoke up. 'Well put, Master' they said – because they would not dare to ask him any more questions.

Reflection on the Manuscript Page

At the beginning of today's Gospel reading Luke tells us one key point about the Sadducees: they didn't believe in the Resurrection. They were a highly skeptical bunch of people made up from high priests, aristocratic families and wealthy merchants. On the whole they held good relationships with the Roman rulers and represented a conservative view of Judaism. Unlike the Pharisees, the Sadducees did not believe in immortality, nor in angels or evil spirits. Their religion was literally rooted in a very earthly image Heaven. They could not contemplate what heaven could be like, unless they could see it with their own eyes. In Jesus' time, the Sadducees controlled the two most important institutions of Jewish society: the Temple of Jerusalem (known as Herod's Temple) and the Sanhedrin (the governing body looking after the religious and legal issues of the Jews).

The question asked in today's reading by the Sadducees was not asked to seek clarity, but to trick Jesus. They wanted to sow division. But in His answer, Jesus wants to lift them from their very earthly views of religion to an almost cosmic vision. Jesus takes them to a place which transcends space and time… a space which not only holds Moses, Abraham, Jacob, Isaac, but also our our own deceased family members, friends and everyone who has been around since the beginning of Creation.

Our artwork today is a page from the Holkham Bible Picture Book, produced during the early 14th century. The manuscript contains over 230 illustrations, depicting scenes from the Old and New Testaments. The Bible takes its name from Holkham Hall in Norfolk, where it was part of the collection of the Earls of Leicester until 1952, before entering the British Library in London. A rare scene on the manuscript's opening page suggests that it was commissioned by a Dominican friar and intended to be shown to a literate, exclusive audience. The page we are illustrating shows three attempts to trap Christ: above left, we see three men asking whether tribute money should be paid to Caesar; then we see two Sadducees propound the riddle of the woman with seven brothers, and the state of her marriage on Judgement Day. Below, two Pharisees ask Christ which is the greatest commandment. On the right, five Pharisee doctors of the law consider Christ's difficult question and the answer He gave. One holds the tables of the law, two wear phylacteries on their foreheads, one holds a thorn twig in front of his face (referring to the Passion), and another points to a thorn attached to the hem of his robe. The text is written in Anglo-Norman French. This is a beautiful page outlining the different ways the Sadducees and Pharisees tried to trick Jesus.

Some scribes then spoke up. ‘Well put, Master’

Feast of the Presentation of the Blessed Virgin...