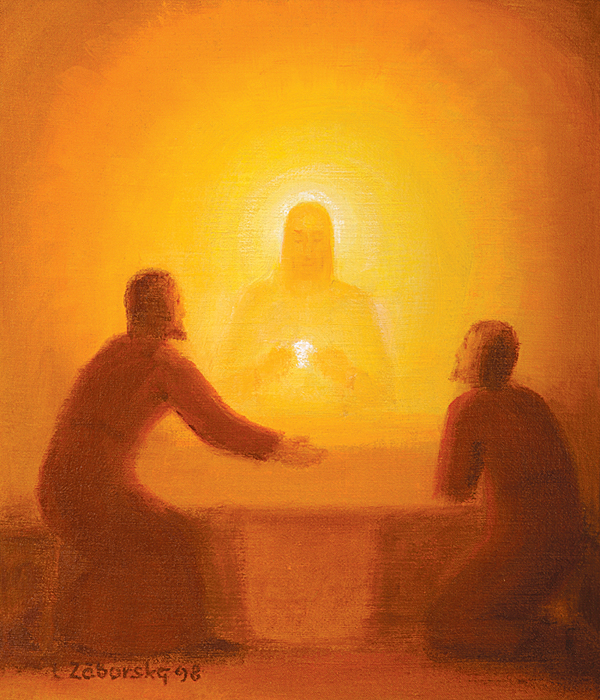 Touch me and see for yourselves

The disciples told their story of what had happened on the road and how they had recognised Jesus at the breaking of bread.

They were still talking about all this when Jesus himself stood among them and said to them, 'Peace be with you!' In a state of alarm and fright, they thought they were seeing a ghost. But he said, 'Why are you so agitated, and why are these doubts rising in your hearts? Look at my hands and feet; yes, it is I indeed. Touch me and see for yourselves; a ghost has no flesh and bones as you can see I have.' And as he said this he showed them his hands and feet. Their joy was so great that they still could not believe it, and they stood there dumbfounded; so he said to them, 'Have you anything here to eat?' And they offered him a piece of grilled fish, which he took and ate before their eyes.

Then he told them, 'This is what I meant when I said, while I was still with you, that everything written about me in the Law of Moses, in the Prophets and in the Psalms has to be fulfilled.' He then opened their minds to understand the scriptures, and he said to them, 'So you see how it is written that the Christ would suffer and on the third day rise from the dead, and that, in his name, repentance for the forgiveness of sins would be preached to all the nations, beginning from Jerusalem. You are witnesses to this.'

Luke in today's Gospel reading wants to make clear that the Risen Lord was not a ghost or a spirit. No, Christ was physically present and real after the Resurrection. Luke writes: Look at my hands and feet;… touch me;… a ghost has no flesh and bones as you can see I have…'  Jesus made it clear with those words that He was not a disembodied spirit. Also by what He did (walking, eating fish, etc…) He showed that He was there physically with them. He was physically raised from death and appearing to his disciples. These were not just apparitions, they were appearances!

All the appearances to His disciple after the Resurrection led them to a deeper understanding of who Jesus truly was. Ladislav Záborský manages in this painting to convey the physicality and divinity of Christ. As a Slovak painter, he attempted with each painting to discover God and was known for the 'spiritual light' effects in his canvases. About his own work he said: 'Art that seeks truth and beauty is the anticipation of eternity'. A lovely quotation.

He was carried up to heaven

Two Disciples on their way to Emmaus

They recognised him at the breaking of bread

They were still talking about all this when Jes...