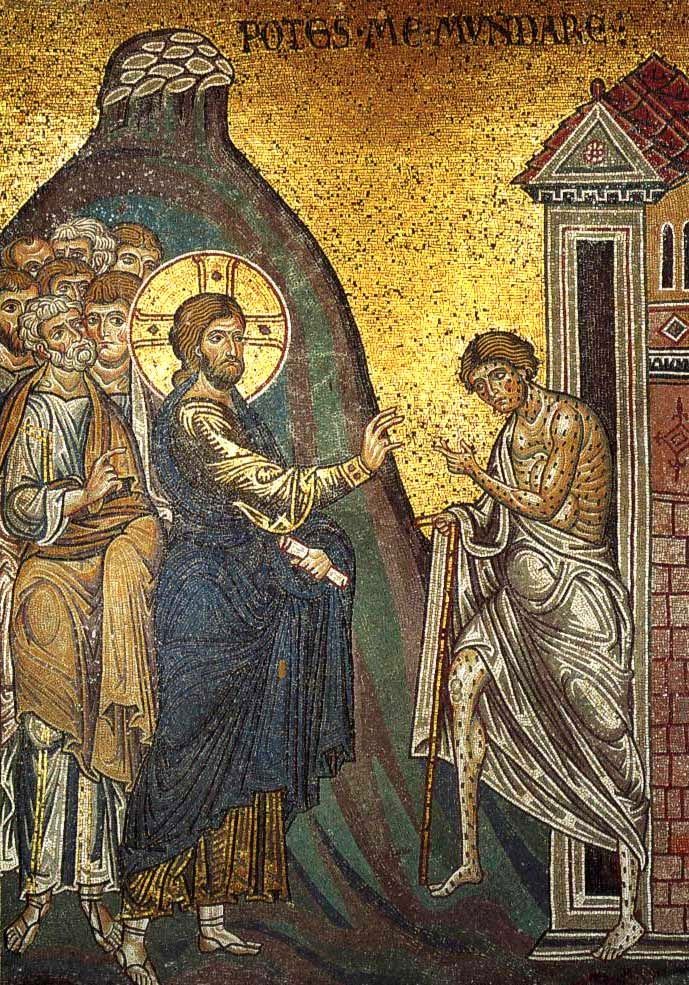 Jesus was in one of the towns when a man appeared, covered with leprosy. Seeing Jesus he fell on his face and implored him. ‘Sir,’ he said ‘if you want to, you can cure me.’ Jesus stretched out his hand, touched him and said, ‘Of course I want to! Be cured!’ And the leprosy left him at once. He ordered him to tell no one, ‘But go and show yourself to the priest and make the offering for your healing as Moses prescribed it, as evidence for them.’

His reputation continued to grow, and large crowds would gather to hear him and to have their sickness cured, but he would always go off to some place where he could be alone and pray.

Reflection on the Mosaic Ceiling

Today’s Gospel reading is more than just a story of healing a sick man. Leprosy refers not just to the physical illness showing symptoms of a skin disease, it is also symbolic for a person, who was considered to be unclean spiritually, a sinner. Thus we can read this passage replacing the word ‘leprosy’ with ‘sin’. Just like leprosy, sin spreads, is contagious, destroys a person, affects our communities, and needs to be healed.

Jewish laws at the time, demanded that lepers moved out of the communities they lived in, and to live separately in ghettoes far removed from the cities. Within those ghettoes, we witness how leprosy broke down the racial, geographical and religious barriers. They were all dealing with their illness together. Yes, desperation and adversity break down barriers that often divide people. Adversity unites. So the leper in our Gospel reading is there as much as an individual, as he is as a representative of a whole community: all of us, who are sinners and spiritually unclean.

Jesus, after he has healed the leper, instructs him to see a priest, complying with the Jewish laws of the time. By doing so two things happened: the priest would have confirmed in an objective way that the leprosy was healed, thus giving expert confirmation to the authenticity of the miracle. And also, the priest, by confirming that the man was healed, would implicitly re-instate the leper into society. Christ’s healing and mercy re-instates us not only with God, but also with our community…

Today’s artwork is a detailed photograph of a mosaic at the Cathedral of the Assumption, Monreale, Sicily. The inscription above the scene reads IESUS SANAVIT LEPROSUM DICENTEM DOMINE SI VIS POTES ME MUNDARE, "Jesus healed the leper who said ‘Lord, if you wish you can cleanse me’.

Jesus comes not to call the virtuous, but sinne...

That will be the time when they will fast