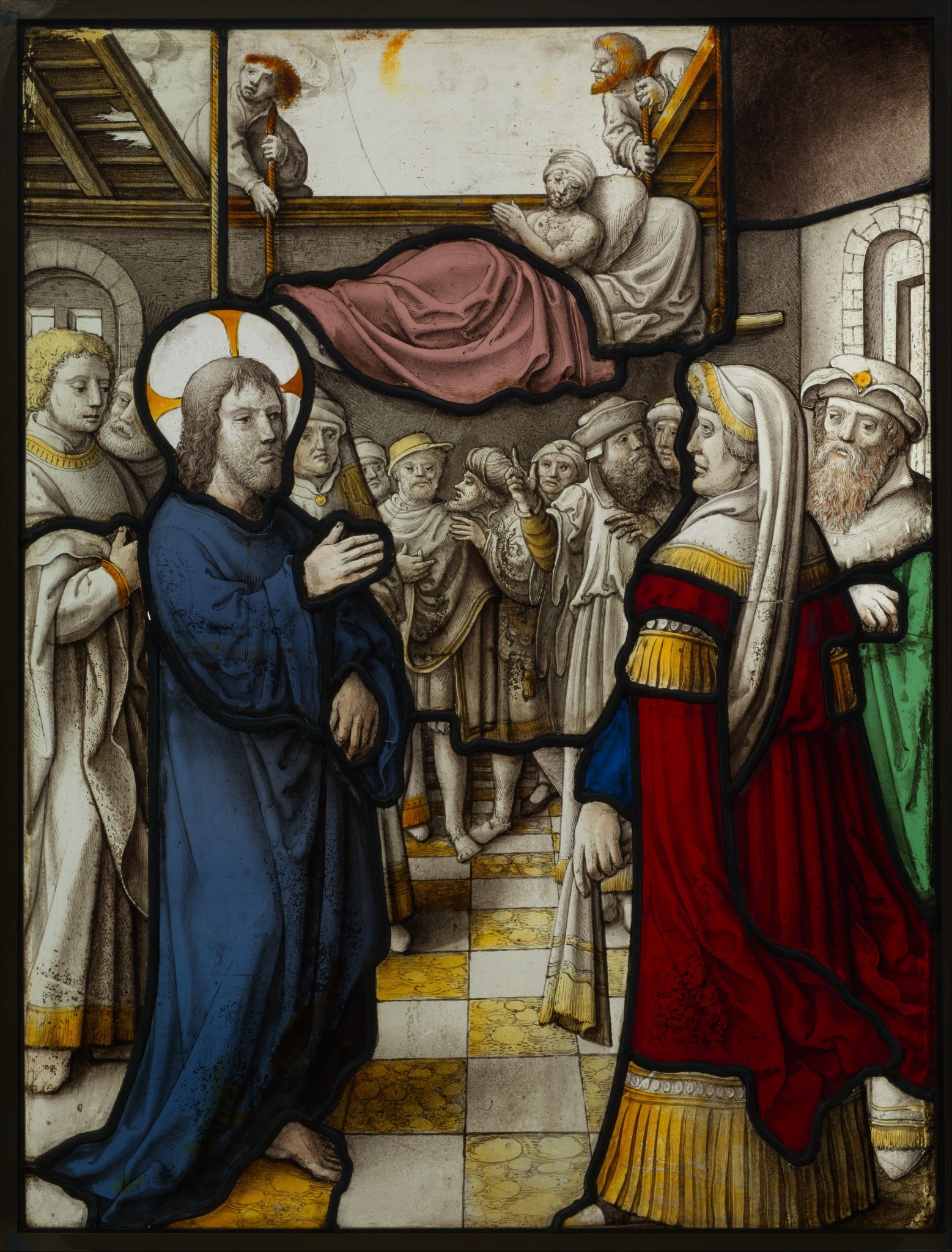 Healing of the Paralytic at Capernaum, (one of a set of 12 scenes from The Life of Christ),
Stained glass panel by Jan Rombouts (1475–1535),
Executed in circa 1525,
Leuven, Belgium
© Metropolitan Museum of Art, New York

Healing of the Paralytic at Capernaum, (one of a set of 12 scenes from The Life of Christ),
Stained glass panel by Jan Rombouts (1475–1535),
Executed in circa 1525,
Leuven, Belgium
© Metropolitan Museum of Art, New York

Seeing their faith he said, ‘My friend, your sins are forgiven you.’

Jesus was teaching one day, and among the audience there were Pharisees and doctors of the Law who had come from every village in Galilee, from Judaea and from Jerusalem. And the Power of the Lord was behind his works of healing. Then some men appeared, carrying on a bed a paralysed man whom they were trying to bring in and lay down in front of him. But as the crowd made it impossible to find a way of getting him in, they went up on to the flat roof and lowered him and his stretcher down through the tiles into the middle of the gathering, in front of Jesus. Seeing their faith he said, ‘My friend, your sins are forgiven you.’ The scribes and the Pharisees began to think this over. ‘Who is this man talking blasphemy? Who can forgive sins but God alone?’ But Jesus, aware of their thoughts, made them this reply, ‘What are these thoughts you have in your hearts? Which of these is easier: to say, “Your sins are forgiven you” or to say, “Get up and walk”? But to prove to you that the Son of Man has authority on earth to forgive sins,’ – he said to the paralysed man – ‘I order you: get up, and pick up your stretcher and go home.’ And immediately before their very eyes he got up, picked up what he had been lying on and went home praising God.

Reflection on the stained glass panel

Today's stained glass panel dates from 1525. Whilst most 16th-century stained glass was used in churches, some smaller examples (like ours) could also be found in wealthy domestic settings for private devotion. The detailing in our panel is exquisite (look at the fine etching of the figures in the background and the yellow marbled floor tiles). The coloured sections are reserved for the protagonists in our story: a Pharisee, a Doctor of the Law, the paralysed man and Jesus…

I was stunned today when somebody told me that certain things I had said (quite unknowingly) had lead them to thinking that it would be nice to be a Catholic. I replied saying ‘well, if you were to ask me, I would say that is the Holy Spirit prompting you to follow where He is leading…’

By using the word ‘all’ in this passage does this include the Pharisees?

Exquisite indeed Patrick. I could stare at this all day. I love the expression on the faces of the two men in the centre, what is the bearded man saying to the one in the yellow hat? And the men lowering the bed? You can almost sense the breeze up there! Glorious indeed.

Reflecting on the passage I also think it means other people have different ways of getting to Jesus, a warning that our own personal may not be the only one, and if people are determined to find Him, they will make their own way too.

This story should encourage us to intercede for others. Bring the people we care about before the Lord. What true friends that paralysed man had.

A similar story to the centurion’s servant being lowered down through the roof.

Also similar to Jairus, who couldn’t bring his daughter to Jesus; but he did bring Jesus to his daughter.

Glad I found this Christian art group. It helps me reflect.

Thank you Moira.
Welcome to the group
Patrick

It is a real gift I think- mornings wouldn’t be the same without it.

I agree, my first joy every morning.

They went up on to the flat roof and lowered him