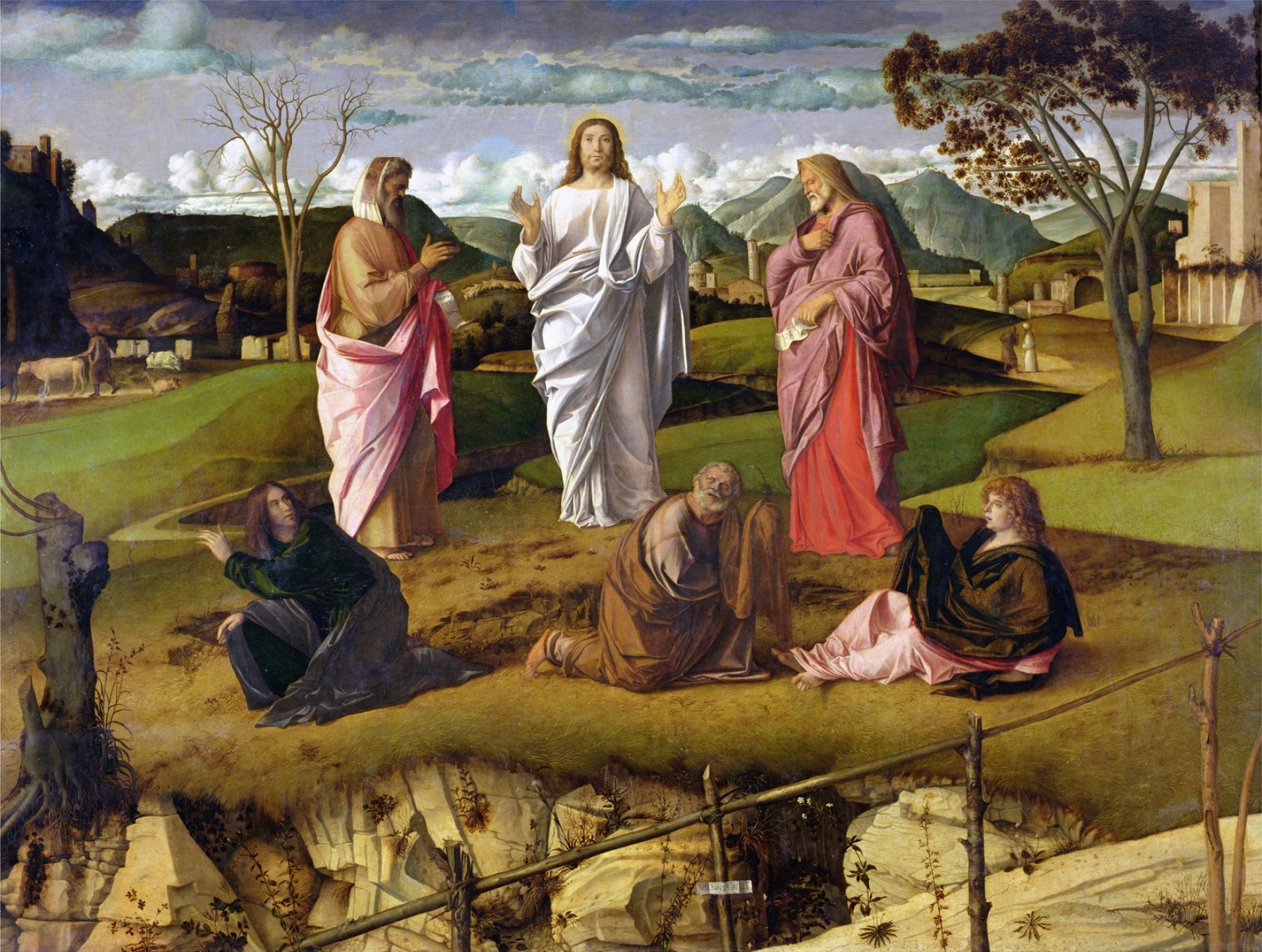 The Transfiguration of Christ,
Painted by Giovanni Bellini (1430-1516),
Oil on panel,
Painted circa 1480,
© Museum of Capodimonte, Naples, Italy

The Transfiguration of Christ,
Painted by Giovanni Bellini (1430-1516),
Oil on panel,
Painted circa 1480,
© Museum of Capodimonte, Naples, Italy

Feast of the Transfiguration of Christ

Jesus took with him Peter and John and James and went up the mountain to pray. As he prayed, the aspect of his face was changed and his clothing became brilliant as lightning. Suddenly there were two men there talking to him; they were Moses and Elijah appearing in glory, and they were speaking of his passing which he was to accomplish in Jerusalem. Peter and his companions were heavy with sleep, but they kept awake and saw his glory and the two men standing with him. As these were leaving him, Peter said to Jesus, ‘Master, it is wonderful for us to be here; so let us make three tents, one for you, one for Moses and one for Elijah.’ – He did not know what he was saying. As he spoke, a cloud came and covered them with shadow; and when they went into the cloud the disciples were afraid. And a voice came from the cloud saying, ‘This is my Son, the Chosen One. Listen to him.’ And after the voice had spoken, Jesus was found alone. The disciples kept silence and, at that time, told no one what they had seen.

Today’s painting was painted by Giovanni Bellini around 1480. Bellini was described in 1506 by artist Albrecht Dürer as 'the best painter of all'. He was celebrated mostly for his stunning altarpieces, and this is one of them. We see Christ in the very centre, in a bright white cloak, as the source of light. A cloud above Christ sends rays of light upon him. To the left of him, we see Moses, his head cloaked with a Jewish prayer shawl, holding a scroll, and to Christ's right stands Elijah, holding a scroll with words ‘God will gather my people’. The apostles Peter (in the middle), James and John are in the lower part, and Ravenna is painted in the background, surrounded by scenes from everyday life in Tuscany

A voice came from the cloud saying: ’This is my Son, the Chosen One. Listen to him.’ By these words Jesus was confirmed in who he was and what his mission was and what we should do: listen to him! Moses and Elijah identified Jesus as the One in whom the promises of the Old Testament are fulfilled… ultimately on the cross. To me, however, the phrase that sticks out today is the opening of the passage: that Jesus went up the mountain to pray. This reminds us again how much he actually prayed. Even though he was the Son of God, and nothing would have changed that, he prayed and prayed, over and over again. It was during this time of prayer that everything happened as described in today’s reading.

We can join Jesus in his prayer, so that we too can be changed. We can, for example, pray the Rosary. In 2002, Pope John Paul II added the luminous mysteries to the Rosary. The Transfiguration is one of them, the moment when Jesus revealed Himself as God's Son. "The Gospel scene of Christ's transfiguration, in which the three Apostles Peter, James and John appear entranced by the beauty of the Redeemer, can be seen as an icon of Christian contemplation", wrote John Paul II in the apostolic letter Rosarium Virginis Mariae. John Paul II uses the word beauty as a key quality to get us into the mystery of our faith... a beauty we can find in some of the art we look at in our daily reflections, such as the painting here.

What a great artist! (and opera composer! Lol ﻿😊﻿) His Ecstasy of St Francis in the Frick Collection New York has brought tears to the eyes of atheists so they say.
I have a copy of Raphael’s Transfiguration in my little study.

I was struck by the need for constant prayer as shown us by Jesus. Everything comes from first being in His Presence

Yes agreed. Although I find that God is always doing unexpected things which means the challenge for me is to try and stay in HIs Presence.

Yes, I liked today’s gospel and reflection very much. Thanks Patrick for this little bit of joy every day. However, the phrase that stood out for me is “the apostles kept silent” I’d guess because they were completely stunned !
I must look up these Luminous Mysteries – although I usually say a decade of the Rosary ‘on the hoof’ with my fingers….

‘If anyone wants to be a follower of mine, let ...

The least among you all is the greatest

It was hidden from them so that they should not...