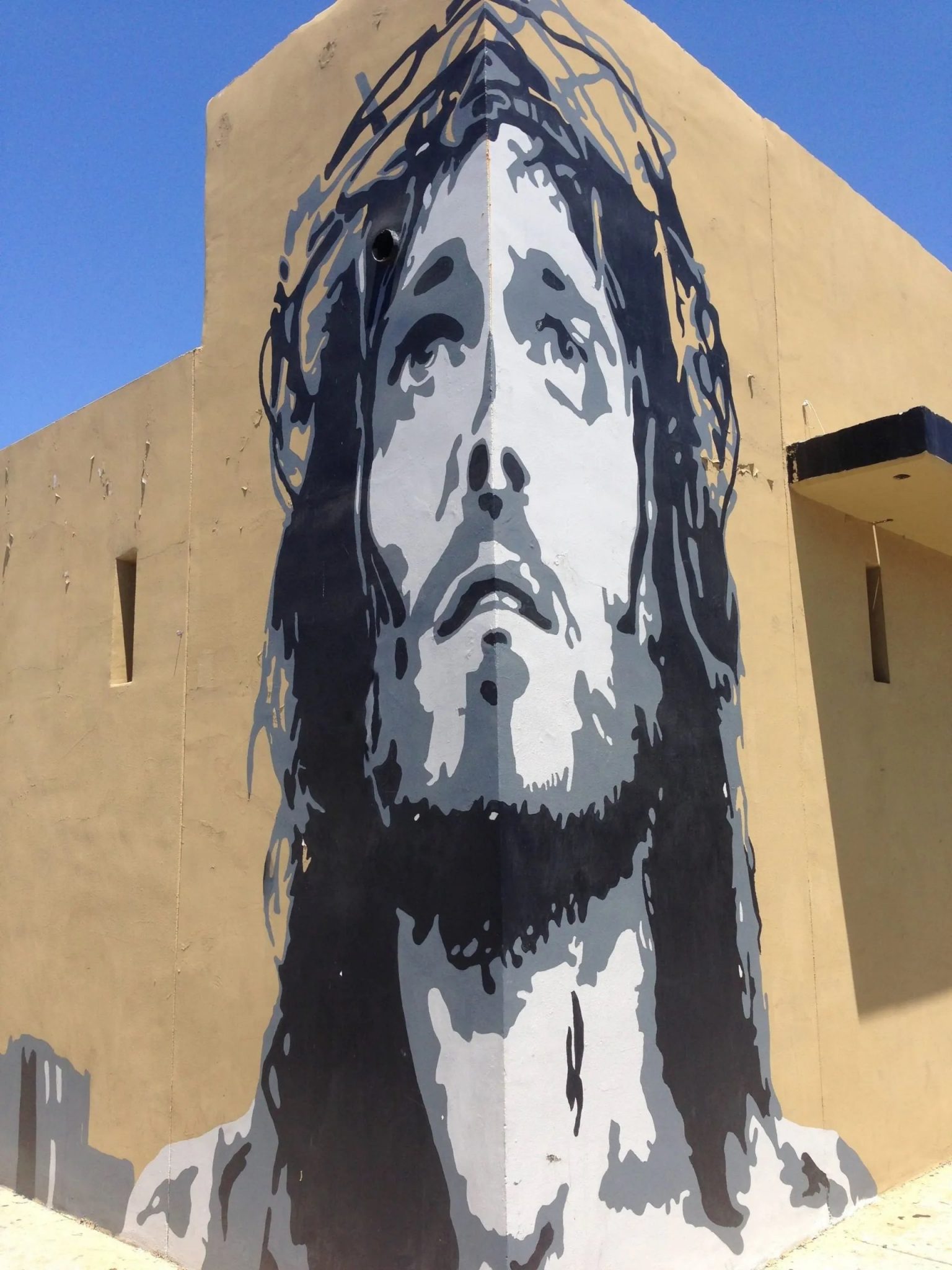 The Passion of Christ,
Sprayed and painted by an Anonymous Street Artist,
Walton Avenue, Los Angeles, street corner
Sprayed in 2012

The Passion of Christ,
Sprayed and painted by an Anonymous Street Artist,
Walton Avenue, Los Angeles, street corner
Sprayed in 2012

At a time when everyone was full of admiration for all he did, Jesus said to his disciples, ‘For your part, you must have these words constantly in your mind: “The Son of Man is going to be handed over into the power of men.”’ But they did not understand him when he said this; it was hidden from them so that they should not see the meaning of it, and they were afraid to ask him about what he had just said.

Reflection on the Street Artwork

I was reading an article relating to Easter (so about the passion of Christ which Jesus is foretelling in today’s reading), and learned that a YouGov survey asked what people associate Easter with. The results came back as follows: Chocolate Easter eggs (76%), bank holiday (67%), hot cross buns (62%), Jesus Christ (55%).

So Jesus is only in fourth place when people think of Easter, a sad state of affairs. In today's reading Jesus talks about his impending passion, where he will be scourged, crowned with thorns and die for all of us on the cross. We can sense from the disciples that they did not understand what was being said to them. Luke draws a very stark picture in which we see Christ and His disciples almost at opposite ends: Jesus understood he would be wearing a crown of thorns soon; the disciples on the other hand did not see this coming and did not understand that the Son of Man was going to be betrayed.

The YouGov poll shows how Christ in popular culture has slipped away to being at best a historical figure that people have heard of. However, the spray painted mural we are looking at today, executed in Los Angeles in 2012, shows the opposite. The artist, through his street art or urban art, tries to bring back with a punch a very striking image of Christ: his passion in the centre of city life. Love them or not, these images are important to have them as part of our popular culture, attracting mainly young people to take interest.

In an interview, a Catholic priest working in a deprived area of Los Angeles said about these types of murals that he hoped ‘that a dangerous, dark alley by Union Avenue would become safer under the presence of the suffering Christ depicted on a mural’. He hoped that the image of Christ might remind gangsters of their childhood days when they were perhaps exposed to Christianity at school… and stop them from committing crime.

The Church has used art to evangelise for centuries. But not so much these days. This is a wonderful example and I hope the priest’s words became true. The Society of Catholic Artists is worth looking up.

I found this artwork very powerful. A good way to evangelise perhaps?

Yes i’d love to read a message concerning How God love his deciple unyil now he love us.

You are the Christ of God

Jesus was praying and said He was to suffer gri...

Anyone who welcomes this little child in my nam...