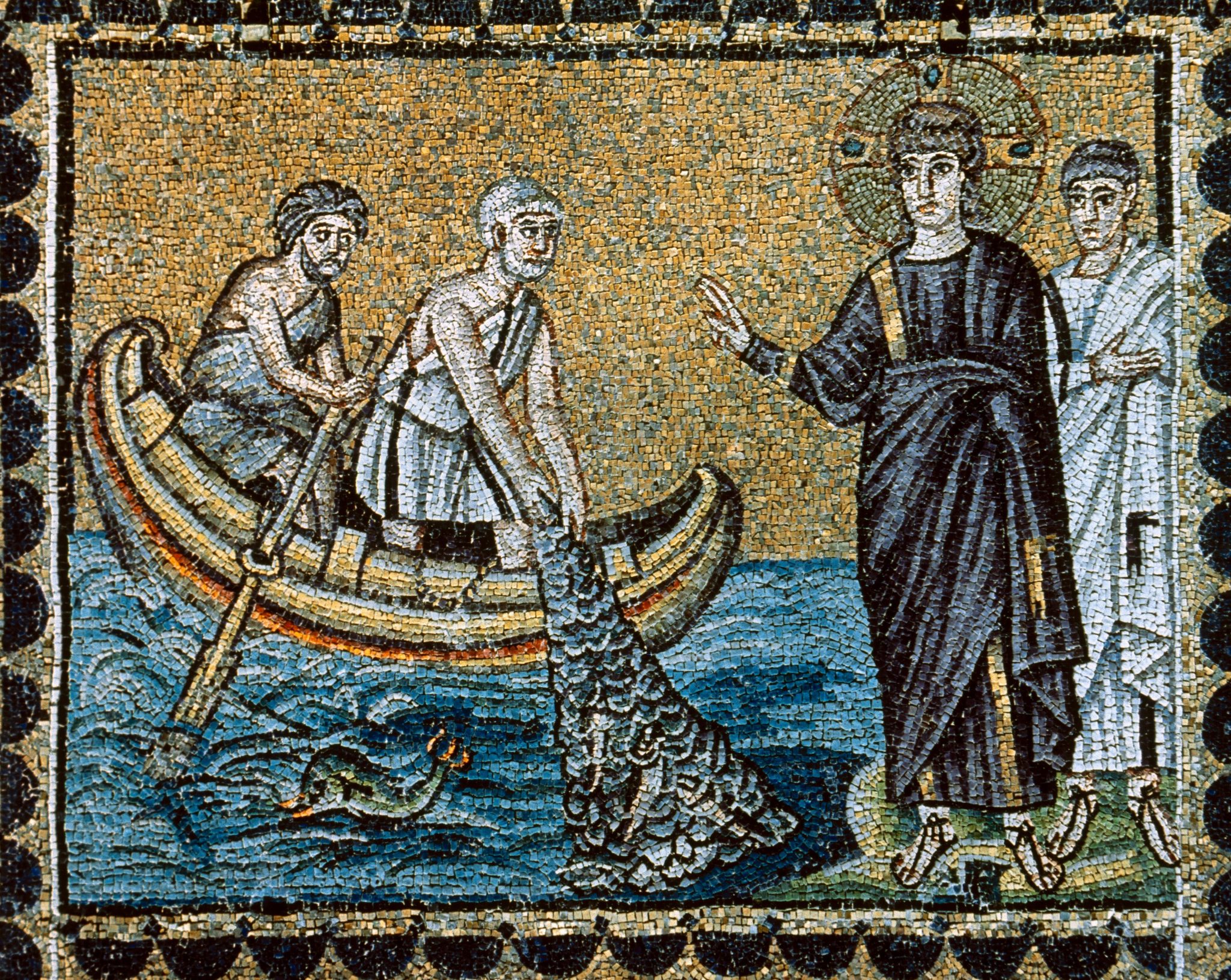 Follow me and I will make you into fishers of men

After John had been arrested, Jesus went into Galilee. There he proclaimed the Good News from God. ‘The time has come’ he said ‘and the kingdom of God is close at hand. Repent, and believe the Good News.’

As he was walking along by the Sea of Galilee he saw Simon and his brother Andrew casting a net in the lake – for they were fishermen. And Jesus said to them, ‘Follow me and I will make you into fishers of men.’ And at once they left their nets and followed him.

Going on a little further, he saw James son of Zebedee and his brother John; they too were in their boat, mending their nets. He called them at once and, leaving their father Zebedee in the boat with the men he employed, they went after him.

Reflection on the 6th century Mosaics

Discipleship is not the same as being simply a student in the modern sense. A disciple in the ancient biblical world actively ‘imitated’ both the life and teaching of the master. It was a deliberate apprenticeship which made the fully formed disciple a living copy of the master. As such we are called too to exactly this discipleship: imitating Jesus in all we do.

Our 6th century mosaic at the Basilica of Saint Apollinare Nuovo in Ravenna depicts the calling of saints Peter and Andrew. Peter and Andrew are seen drawing in their fishing nets that are with a rich catch of fish. Peter has short grey hair and Andrew white cropped hair. In other mosaic scenes in the basilica they are portrayed in exactly the same way. Jesus calls the two with a blessing gesture. Note the way Christ’s fingers are portrayed in the old Byzantine figuration: the tips of the first three fingers (the thumb, index, and middle ones) are brought together, and the last two (the ‘ring' and little fingers) are pressed against the palm.

Who is the fourth figure in this mosaic, the man robed in white?

Good morning,
Such a beautiful mosaic. Who is standing next to Jesus?

I once visited mount athos. The abbott of the monastery used the same hand blessing. Someone told me that the finger positions spell the initials of the Lord’s name. Can anyone confirm?
Also, I visited Ravenna to see the churches and their mosaics. Beautiful!
So many I can’t remember them all.

Who would have guessed office of Pope is based on that simple fisherman?

Jesus was tempted by Satan

Feeling sorry for him, Jesus touched him

Unlike the scribes, he taught them with authority

Say nothing to anyone