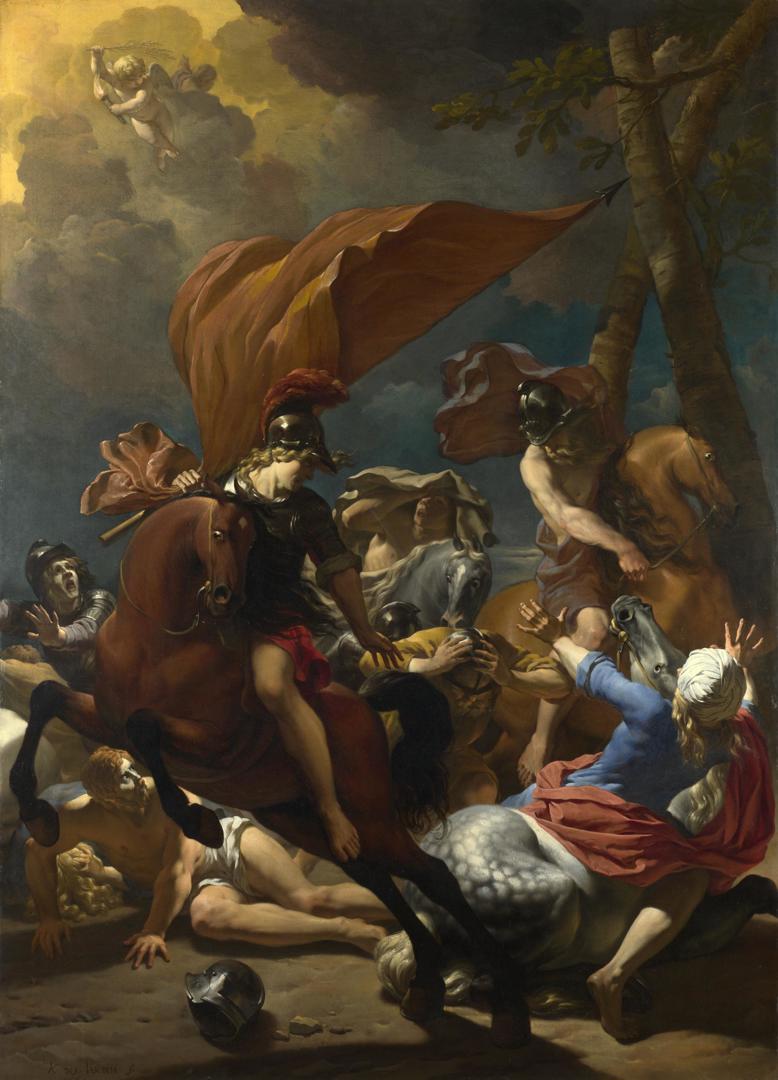 Our large painting by Karel Dujardin depicts the dramatic scene of Saint Paul at the moment of his conversion to Christianity. He had persecuted Christians in Jerusalem but was struck down on the road to Damascus by a vision of Christ, who asked him why he was persecuting Christians. Paul was blinded by a strong light which we can see descending from the top left corner. Even though scripture doesn’t tell us that Saint Paul was riding a horse, artists’ favourite way of depicting the conversion is to show Saint Paul falling off his horse.

Dujardin has captured the moment of terror when the skies split open and the light of heaven was revealed. Paul’s horse rolls to the ground, taking him with it. We don’t see the face of Paul. The little cherub in the heavens is holding a torch of fire but also an olive branch, a symbol of peace, softening the message that has panicked the people below. The movement in this painting is powerful. Even the trees in the background have been shaken by the events.

Perhaps more than any other member of the early church, Saint Paul responded to the call of Jesus in our gospel reading of today: ‘Go out to the whole world; proclaim the Good News to all creation’. He was the great apostle to the Gentiles, to the whole world, way beyond the land of Israel. But he was an unlikely candidate for such a role. From the moment of his conversion depicted in our painting, Paul came to see all of reality in that light which descended from heaven. C.S. Lewis once wrote, ‘I believe in Christianity as I believe that the sun has risen, not only because I see it, but because by it I see everything else’… Paul saw that light, and invites us to illuminate our lives too by the celestial light, so we may see things clearly around us.

Wishing you a happy feast day of the Conversion of Saint Paul.

I am always amazed at the conversion of St. Paul, who was complicit in the stoning of St. Stephen and yet became the main voice of spreading the Gospel to the gentiles. Nobody is beyond the reach of God. With God all things are possible.

Incredible, the conversion of Saul to Paul – a complete turnaround and we definitely owe the spread of faith in the wider world to his erudition. We should thank The Lord today for sending him.
It was dramatic – and no better depiction of drama than this painting, in the true Baroque style. Sadly not on display at the NG but things are all topsy turvy there at the moment…

Without St Paul Christianity would not have become a world religion. People do get struck by God today but not usually in such a dramatic way.
I knew someone who had no religion and opened the old catechism and saw ‘Who made me?’ ‘God made me’. That really struck him and set him on the road to Faith.

What a wild painting! So much going on- so thank you for pointing out the details Patrick, I may have missed them. Paul is the still centre- as is our faith. I love the quote from Lewis too, and so true.

Proclaim the Good News to all creation