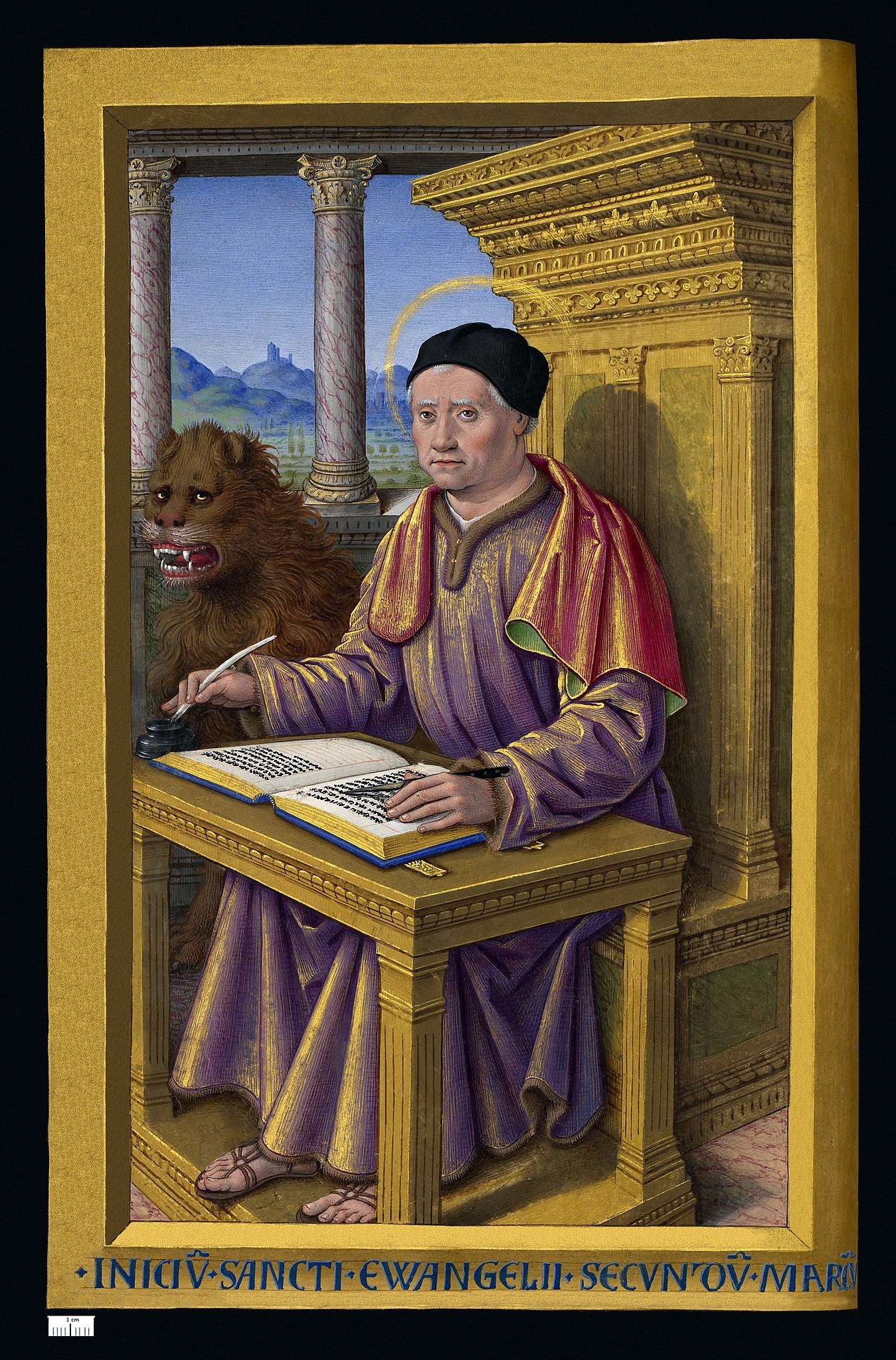 And so the Lord Jesus, after he had spoken to them, was taken up into heaven: there at the right hand of God he took his place, while they, going out, preached everywhere, the Lord working with them and confirming the word by the signs that accompanied it.

Reflection on the Illuminated Miniature

Today we celebrate the feast of Saint Mark the evangelist. Our illuminated manuscript miniature was executed circa 1503 by Jean Bourdichon (1456-1521), one of Europe’s most accomplished miniature painters. It is taken from the book of hours ‘Grandes Heures of Anne of Brittany’, Queen of France to two kings in succession. In the history of illuminated manuscripts, this is a very late book. The miniature in fact looks more like a painting than a book illustration. The highly intricate detailing, especially in the gilding is particularly exquisite.

We see Saint Mark depicted at his desk, writing his Gospel. Mark was a companion of Saint Peter and is said to have survived being thrown to the lions, which is why  he is shown with a lion. He is often also shown with a winged lion, as another legend has it that Mark, while taking refuge from a storm in the city of Venice, was visited in a dream by an angel in the form of a winged lion.

In addition to writing his Gospel, Saint Mark is credited with founding the Church of Alexandria in Egypt, one of the original Apostolic Sees of Christianity (along with Rome, Antioch, Constantinople, and Jerusalem). I always find it fascinating that already at the time, people such as Mark evangelised the word of Christ by traveling such great distances. The Gospel of Mark is the oldest of the four Gospels (Matthew and Luke based a lot of their writings on Mark; these three Gospels of Mark, Luke and Matthew are also called the ‘Synoptic Gospels’).

Mark doesn’t include a Christmas story. What is striking in the Gospel of Mark is that Jesus is portrayed as a man of action who hits the ground running, with no time to waste. The start of today’s Gospel reading ‘Go out to the whole world; proclaim the Good News to all creation’ reflects this sense of urgency… An urgency we are all called to act upon.

Love today’s painting/illumination and the cute lion. Interesting your telling us the slant Mark puts on things though…I should do more comparisons to see what each emphasizes…

Yes, it is believed John’s gospel was written last
AD 90–110

Go out and proclaim the Good News

Feast of the Ascension of the Lord

The Conversion of Saint Paul