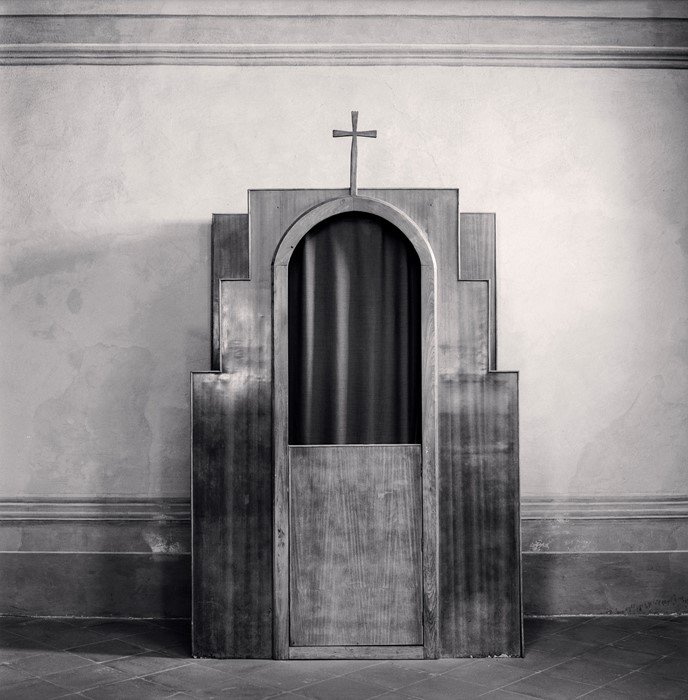 My child, your sins are forgiven

When Jesus returned to Capernaum, word went round that he was back; and so many people collected that there was no room left, even in front of the door. He was preaching the word to them when some people came bringing him a paralytic carried by four men, but as the crowd made it impossible to get the man to him, they stripped the roof over the place where Jesus was; and when they had made an opening, they lowered the stretcher on which the paralytic lay. Seeing their faith, Jesus said to the paralytic, ‘My child, your sins are forgiven.’ Now some scribes were sitting there, and they thought to themselves, ‘How can this man talk like that? He is blaspheming. Who can forgive sins but God?’ Jesus, inwardly aware that this was what they were thinking, said to them, ‘Why do you have these thoughts in your hearts? Which of these is easier: to say to the paralytic, “Your sins are forgiven” or to say, “Get up, pick up your stretcher and walk”? But to prove to you that the Son of Man has authority on earth to forgive sins,’ – he turned to the paralytic – ‘I order you: get up, pick up your stretcher, and go off home.’ And the man got up, picked up his stretcher at once and walked out in front of everyone, so that they were all astounded and praised God saying, ‘We have never seen anything like this.’

Reflection on the Photograph

Celebrated landscape photographer Michael Kenna (born 1953), did a series about the most secret spaces of northern Italian churches. Many of the photos are of confessionals. When being interviewed about his series, of which we are showing just the one illustration, Michael Kenna said:  “These images symbolise what I continue to search for – the invisible within the visible, the intangible contained in the tangible… If words, thoughts and emotions could be made visual, these containers of memories would reveal a multitude of densely packed hidden secrets, confessed, exchanged and discarded, in return for some prayers and a priest’s blessing and forgiveness.”

Today’s passage is all about forgiveness. What might at first sight be a simple story about healing turns into a tense, almost theological confrontation. Jesus forgives the paralytic’s sins, without Him being asked to. The scribes who are present consider this to be blasphemy. Only God can forgive sins. But Jesus uses his power to heal the body as a sign that he has authority to heal the soul also. Mark in our Gospel passage of today is already signalling the charge on which the Jewish authorities will later crucify Jesus: blasphemy. So Jesus isn’t shy here and makes a huge and important claim for Himself:  that He is God. In claiming that He can forgive sins, He is putting himself equal with His Father…. and when He forgives our sins in confession we are truly reborn...

Why do your disciples not fast?

Why do your disciples not fast?

I did not come to call the virtuous, but sinners

The sabbath was made for man, not man for the s...