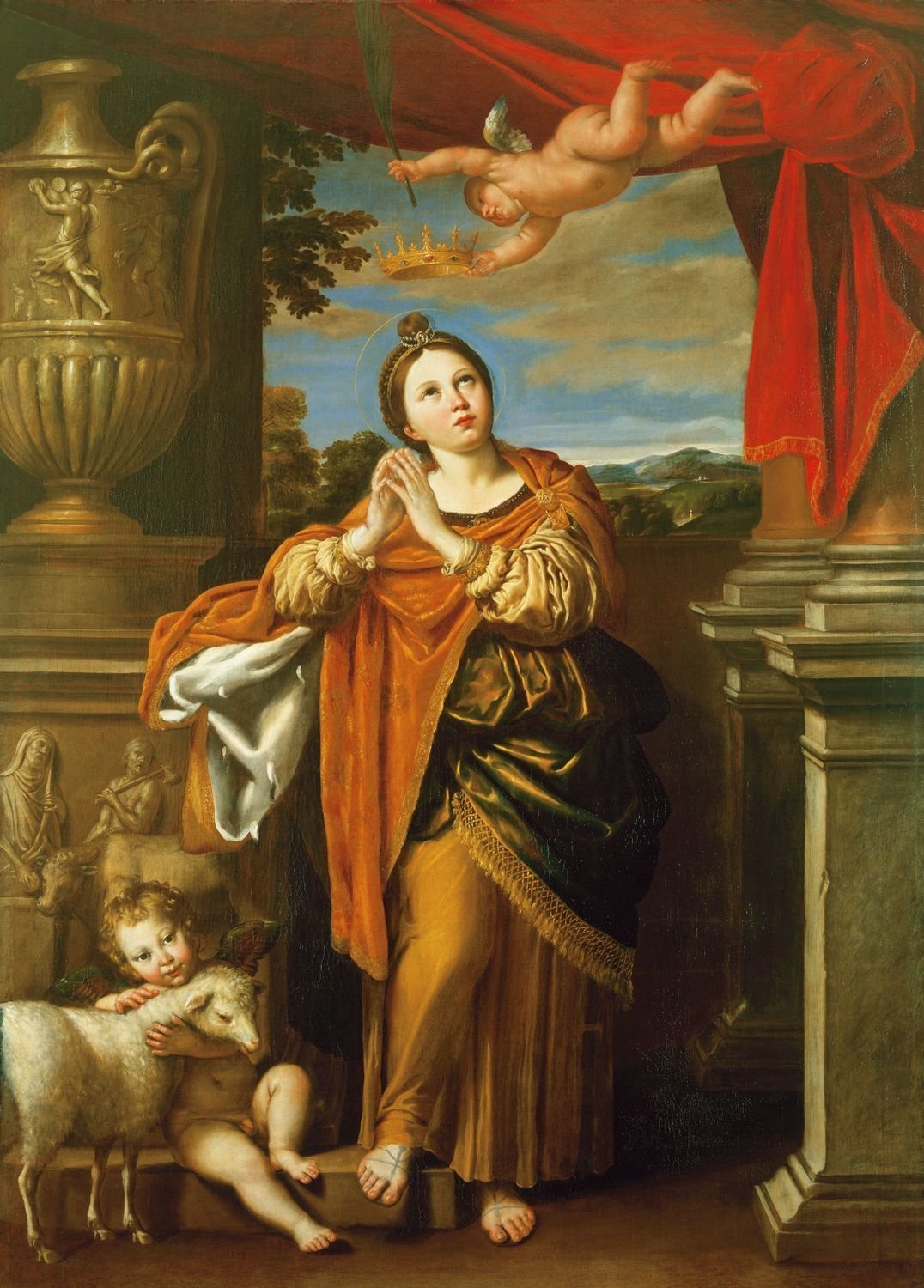 Jesus went home, and once more such a crowd collected that they could not even have a meal. When his relatives heard of this, they set out to take charge of him, convinced he was out of his mind.

Yesterday we celebrated the feast of Saint Sebastian, and today we celebrate Saint Agnes (291-304AD), another saint who was killed in Rome during the time of Emperor Diocletian in 304. In 1605 (during the course of the remodelling of the Roman basilica of Sant’ Agnese Fuori le Mura) her remains were discovered, during our painter's lifetime. It made headline news at the time, and artists went into a flurry of representing the saint in various ways. Domenichino shows the saint gazing heavenwards while an angel holds a crown and martyr’s palm above her. The large classical vase and the relief sculpture signify the pagan beliefs she has rejected; the lamb (agnus in Latin) refers to her purity and the life she actively chose.

Saint Agnes was a beautiful young lady from a wealthy family, and her hand in marriage was highly sought after. According to legend, the young men she turned away became so angry and insulted by her devotion to God (she would simply reply to any advances, ‘Jesus Christ is my only spouse’) that they began to submit her name to the Roman authorities as a Christian follower. She died a virgin-martyr at the age of 13 on 21 January 304 AD.

Saint Agnes is a big feast day here in Rome. A mass will be said this morning at Sant' Agnese fuori le Mura, during which two small living lambs are blessed.  They are then taken to Saint Peter’s for a blessing by the Holy Father, and, finally, to Santa Cecilia in Trastevere, where they will be cared for by some Benedictine nuns who will, later this Spring, sheer their wool and weave from it the “pallium”, the white woolen garments given to newly appointed archbishops (at the Mass for the Solemnity of Peter and Paul with the Holy Father on 29 June), as a sign of their shepherding role and union with the Pope.

Agnes had a foster sister , Emerentiana ( she was nursed by a freed woman, and Emerentiana was her daughter). When they grew up, Emerentiana became Agnes’ maid. After Agnes ‘ martyrdom, Emerentiana went to her tomb to tend it, and was stoned to death by some enraged pagans . She is buried with Agnes, in the same tomb. How are we to know which of these bones belongs to which saint? They are at peace and glory together.

Thank you Niobe.
I did not know the story of Agnes’ foster sister. Very interesting.
God bless
Patrick

Such a rich history and tradition we have in our Church that over a thousand years later Rome commemorates the life and example of a 13 year old girl! Saint Agnes is of course mentioned in our Eucharistic prayer, along with Felicity, Anastasia and Perpetua!

Yes true. We had Eucharistic Prayer I this morning at mass here in seminary in which she is mentioned indeed.
👍

Agnes was a name popular with elderly aunts born at the end of the nineteenth century. I think PG Wodehouse was fond of the name.
Now we know who she was I think her name should be revived in our country. Rambling thoughts in the early morning…!

At school we had a girl with this name. At the age of 14 she saved her money and had it officially changed by deed poll.

Beautiful art and even more beautiful tradition and history, the blessing of the lambs and the meaning they carry. Saint Agnes reminds me a bit of Saint Lucia, also a young graceful lady with a deep faith, a suitor filled with bitter and a tortured end.

Yes we have such a deep, rich tradition indeed. I agree, we are blessed.

Is it against the law on the sabbath day to do ...