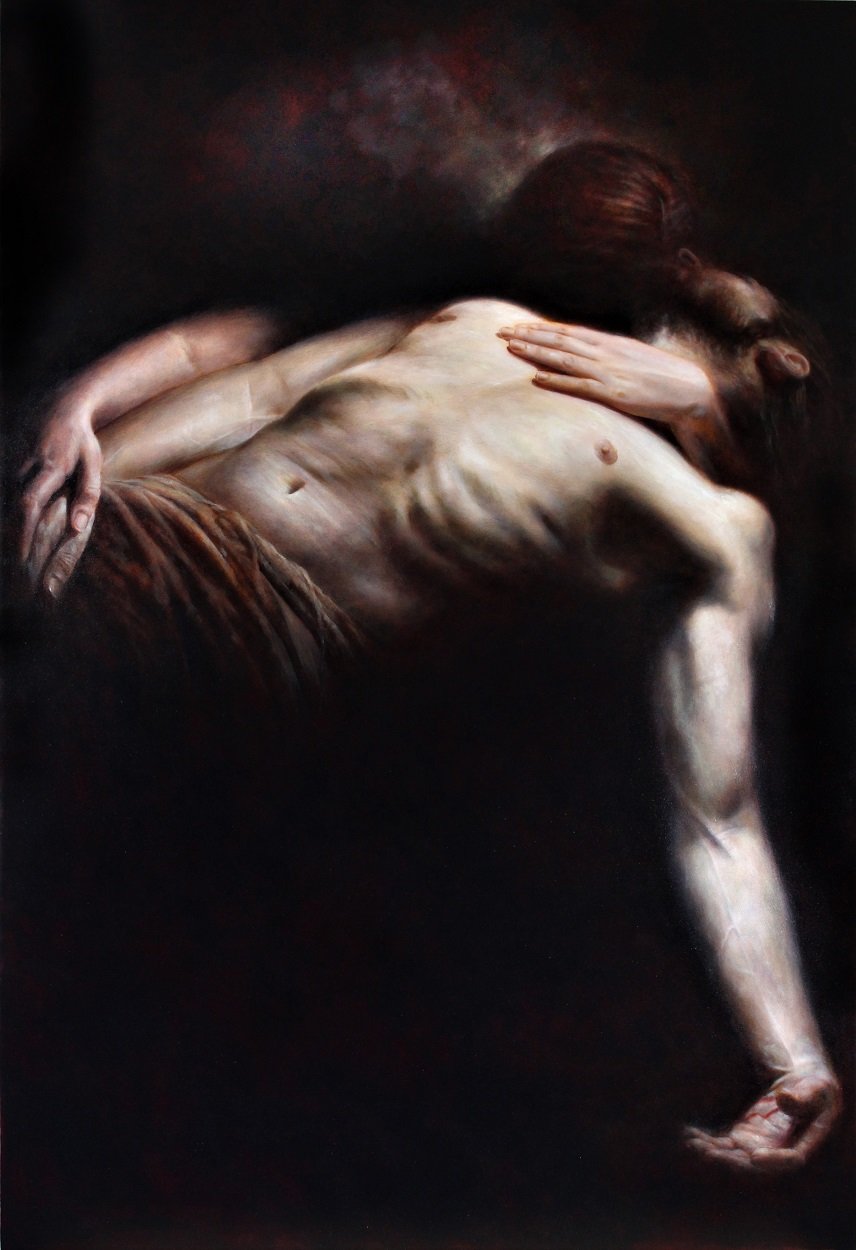 Today's Gospel passage makes for quite uncomfortable reading at first. It seems that Jesus is somehow ignoring His family. But of course He isn't. His family is described twice in this short passage as being on the 'outside'. They are indeed physically outside the building Jesus was in. In that sense they are 'outsiders'. This implies that those sitting in a circle with Jesus are on the 'inside', the insiders. The point Jesus is making here is simply that being on the 'inside' is not just a question of location or bloodline, but of relationship. That relationship is established by following and engaging with Jesus. To be a Christian is to enter into a new family, a larger family, where everyone must be seen as a brother or a sister. The 'insider' is simply anyone who follows Christ and wants to do His will.

In the art world over the years I have often heard about certain artists being 'outsiders'. The term 'outsider' in the arts carries both a positive and a negative connotation. On the positive side it can mean that the artist carries a certain rebellious streak, an aversion to the mainstream, which then gets celebrated. But in the negative sense, being an outsider can also mean that the artist gets snubbed by the mainstream galleries, art critics and collectors. Those outsider artists are just not part of the inner circle, which at times can be elitist.

Everyone must be seen as brother or sister. Thank you Patrick, that really struck me; how easy it is not to see people as such. A much better world I would make if I did see everyone that way.

A beautiful image of the Pietà today. Although no scars can be seen on the body of Christ, I do notice two subtle streaks of blood in the palm of His hand which makes the painting post mortem. The artist has a few different versions of this illustration using different media on his website.

Yes, a very tender image – I like so much about it. Odd that Caravaggio was ignored for centuries but now lauded (rightfully) and as we see, hugely influential. I can’t think anyone before him used the technique (chiaroscuro)
Today’s reading – yes, Christ includes us as belonging to him – as much as his own family. Incidentally, if Jesus did have siblings, it matters not a jot to me.

This posts’ while lovely and expressive leaves me intrigued as to what seems to be excluded. Why are there no scars on the Christs body or hands? Elegant hands of Mary embracing the body, although we assume death, the veins and skeletal structure almost implies sleep, resting or a state of still at peace in his mother’s arms.

Thank you for the comments.
Andrew’s Pietà is lovely based on Caravaggio’s Entombment of Christ.
Marleen, you are right, the hands in Andrew’s painting are different and beautifully expressive.
I also like Christ’s tonality of skin… almost white indicating death, yet the body doesn’t feel completely lifeless…

What a good ‘outsider’ in any way. I like the hands!

Thank you Deacon Patrick for those words. Life is full of ‘inner’ and ‘outer’ circles.
I believe people are artists by there nature. About 30 years ago I painted a risen christ for Easter display in our church. One lady complimented me, then told me about her relative; “but
he’s a proper artist”.
The Lord does not want outsiders. He wants everyone in his kingdom.

Well said ‘The Lord does not want outsiders. He wants everyone in his kingdom.’
Very true

Some Pieta’s leave me cold, others are so intimate they feel like an intrusion. This is one of the intimate ones,. Interesting that that we laud the old masters whose paintings were often, sometimes exclusively, religious, yet today religious subjects are not seen in the same way. The old painters were not necessarily that religious either, but ambitious, so they knew how to ‘flatter’ their patrons. It isn’t for us to judge these things. We take what we take from them. These days we have to look, especially in the abstract, for the soul of the artist and how it speaks to us. It can be more of a challenge, I agree , but also a call to engagement.
As for the reading it also speaks of intimacy. How do we feel when Jesus calls us His brothers and sisters? I want to step away from it sometimes too…

The Pieta is a wonderfully emotional way of portraying grief. The grief of Our Lady at the death of her beloved son although I always think that it must have been tinged with joy at the knowledge that He had fulfilled His earthly mission so fully. His teachings are there for all of us to soak up.
Michaelangelo’s Pieta in St Peter’s Basilica has moved people to tears on many occasions.

Yes, grief and joy. I feel sad for the bereaved, but happy for the one who has gone to the Lord.

Yes, Michelangelo’s Pietà is probably my very favourite work of art. Each time I see it (and I am graved to see it very regularly here in Rome), it moves me to tears.