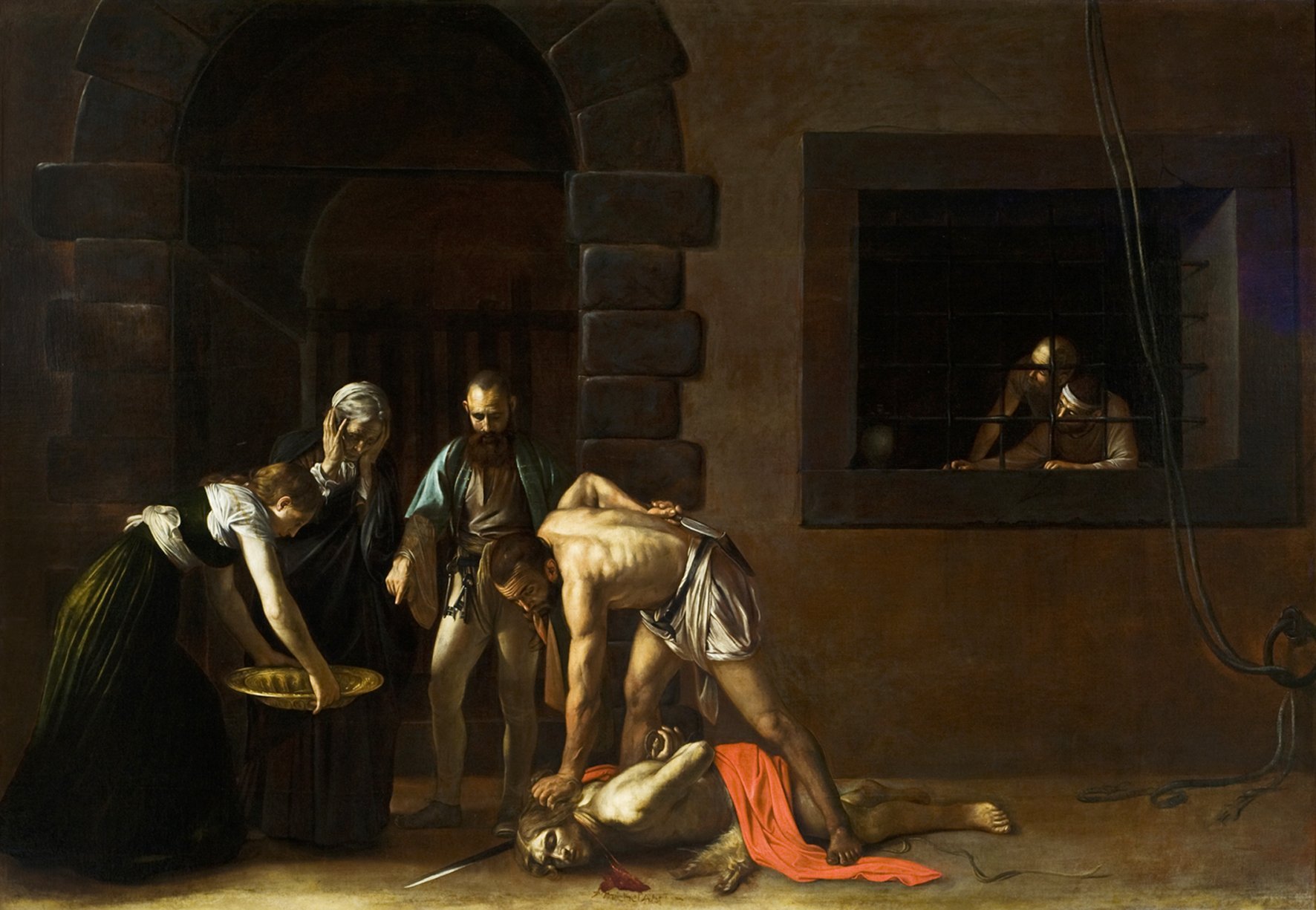 Herod sent to have John arrested, and had him chained up in prison because of Herodias, his brother Philip’s wife whom he had married. For John had told Herod, ‘It is against the law for you to have your brother’s wife.’ As for Herodias, she was furious with him and wanted to kill him; but she was not able to, because Herod was afraid of John, knowing him to be a good and holy man, and gave him his protection. When he had heard him speak he was greatly perplexed, and yet he liked to listen to him.

An opportunity came on Herod’s birthday when he gave a banquet for the nobles of his court, for his army officers and for the leading figures in Galilee. When the daughter of this same Herodias came in and danced, she delighted Herod and his guests; so the king said to the girl, ‘Ask me anything you like and I will give it you.’ And he swore her an oath, ‘I will give you anything you ask, even half my kingdom.’ She went out and said to her mother, ‘What shall I ask for?’ She replied, ‘The head of John the Baptist.’ The girl hurried straight back to the king and made her request, ‘I want you to give me John the Baptist’s head, here and now, on a dish.’ The king was deeply distressed but, thinking of the oaths he had sworn and of his guests, he was reluctant to break his word to her. So the king at once sent one of the bodyguard with orders to bring John’s head. The man went off and beheaded him in prison; then he brought the head on a dish and gave it to the girl, and the girl gave it to her mother. When John’s disciples heard about this, they came and took his body and laid it in a tomb.

Although a relatively small island, Malta holds two paintings by Caravaggio: one of St Jerome in his study, and the other, the painting we are looking at today: The Beheading of St John the Baptist. The painting was commissioned by the Order of Malta in 1608 to be part of the altarpiece (the largest Caravaggio would ever paint) in St John’s Co-Cathedral in Valetta. The painting depicts the moment after the executioner has struck John with his sword and has now drawn a knife from his belt to finish the job. A rather cruel scene, but yet there is a great serenity, seen in all the empty space that surrounds the central figures. Saint John isn’t in a kneeling position as is customary in most other artworks depicting this theme, but is on the ground, his hands tied behind his back so that his body is in a pose similar to that of a sacrificial lamb. Salome stands ready with a golden platter to receive his head. A powerless bystander woman is looking on in shock, realising that the execution is wrong. This is the only painting by Caravaggio to bear his signature, which he placed in the red blood spilling from the Baptist's cut throat (signed f. Michelang.o, meaning Fra Michelangelo, Brother of the Knights of Malta).

Saint John the Baptist, six months older than his cousin Jesus, was a man of great integrity, which ultimately cost him his life. The Romans executed criminals and slaves by crucifixion, but they executed their own citizens in what they considered a more merciful punishment by beheading them. We join St John in his dungeon here in our painting. We are there with him, as powerless bystanders, witnessing how he dies for his faith.

Here’s an interesting story… During the Chinese Communist purge of Mao Zedong in 1949 many churches were closed and Christians were arrested and executed. There was a small group of Christians who were meeting privately, in hiding. During one of those meetings, suddenly the doors opened and three communist soldiers walked in with weapons drawn. They shouted for all the Christians to line up against the wall to be executed. The soldiers said, “IF you are not a believer you are free to leave.” Some of the group fled the room. But a group of faithful followers of Christ joined hands and stood together waiting to die for Jesus. After the unbelievers had left, the soldiers lowered their weapons and said, “We are believers, too, and we wanted to find a group of Christians who are willing to die for their faith. May we join you?”... would we be willing to die for our faith like these Chinese Christians or Saint John?

Yes this is a wonderful painting and missed by some visitors to the co-cathedral. Caravaggio was looked down on as an artist for much of the twentieth century but not any more! Fashions in art come and go. So dramatic!!

A prophet is only despised in his own country

And they would not accept Him