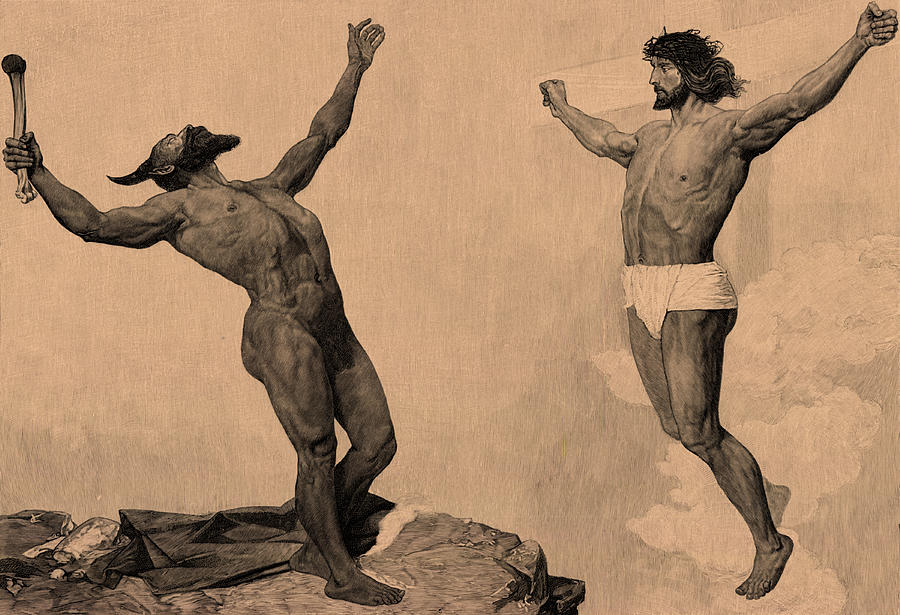 Get behind me, Satan!

Jesus and his disciples left for the villages round Caesarea Philippi. On the way he put this question to his disciples, ‘Who do people say I am?’ And they told him. ‘John the Baptist,’ they said ‘others Elijah; others again, one of the prophets.’ ‘But you,’ he asked ‘who do you say I am?’ Peter spoke up and said to him, ‘You are the Christ.’ And he gave them strict orders not to tell anyone about him.

And he began to teach them that the Son of Man was destined to suffer grievously, to be rejected by the elders and the chief priests and the scribes, and to be put to death, and after three days to rise again; and he said all this quite openly. Then, taking him aside, Peter started to remonstrate with him. But, turning and seeing his disciples, he rebuked Peter and said to him, ‘Get behind me, Satan! Because the way you think is not God’s way but man’s.’

Reflection on the Drawing

Our artist, Sascha Schneider, was born in St Petersburg and moved to Dresden in the late 1880s, where he developed his distinct Symbolist style. We see Christ crucified but triumphant, casting Satan back to hell. The two figures hold similar poses: Christ crucified but ascending to heaven surrounded by clouds; Satan with outstretched arms falling backwards into the abyss.

Today’s Gospel reading follows on immediately from yesterday’s, where Jesus opened the eyes of the blind man. Today it is the turn of the disciples to have their spiritual eyes opened. He foretells what will happen to Him. As depicted in our drawing, He will be crucified and will rise on the third day. It is the phrase ‘Get behind me Satan!’ that delivers a harsh tone. Jesus rebuked Peter as he was being too much focussed on the things of man, rather than thinking in terms of God. The rebuke was meant for Peter to snap out of his way of thinking.

It was a stern reprimand at the time for Peter. But it is true, if we lose sight of God’s love and plans for us, then unknowingly we may well become spokespeople for the evil one. Our focus would then remain on earthly things such as our careers, possessions, ambitions… rather than putting all these at the service of God. Jesus reprimanded Peter strongly to get him back on track. Our artwork today could have a similar challenging impact to make us visually aware of Evil but, at the same time, knowing how Jesus conquered it by His sacrifice for us on the cross.

The feeding of the four thousand

Anyone who loses his life for my sake will save it

Be on your guard against the yeast of the Phari...

The blind man was cured and could see everythin...