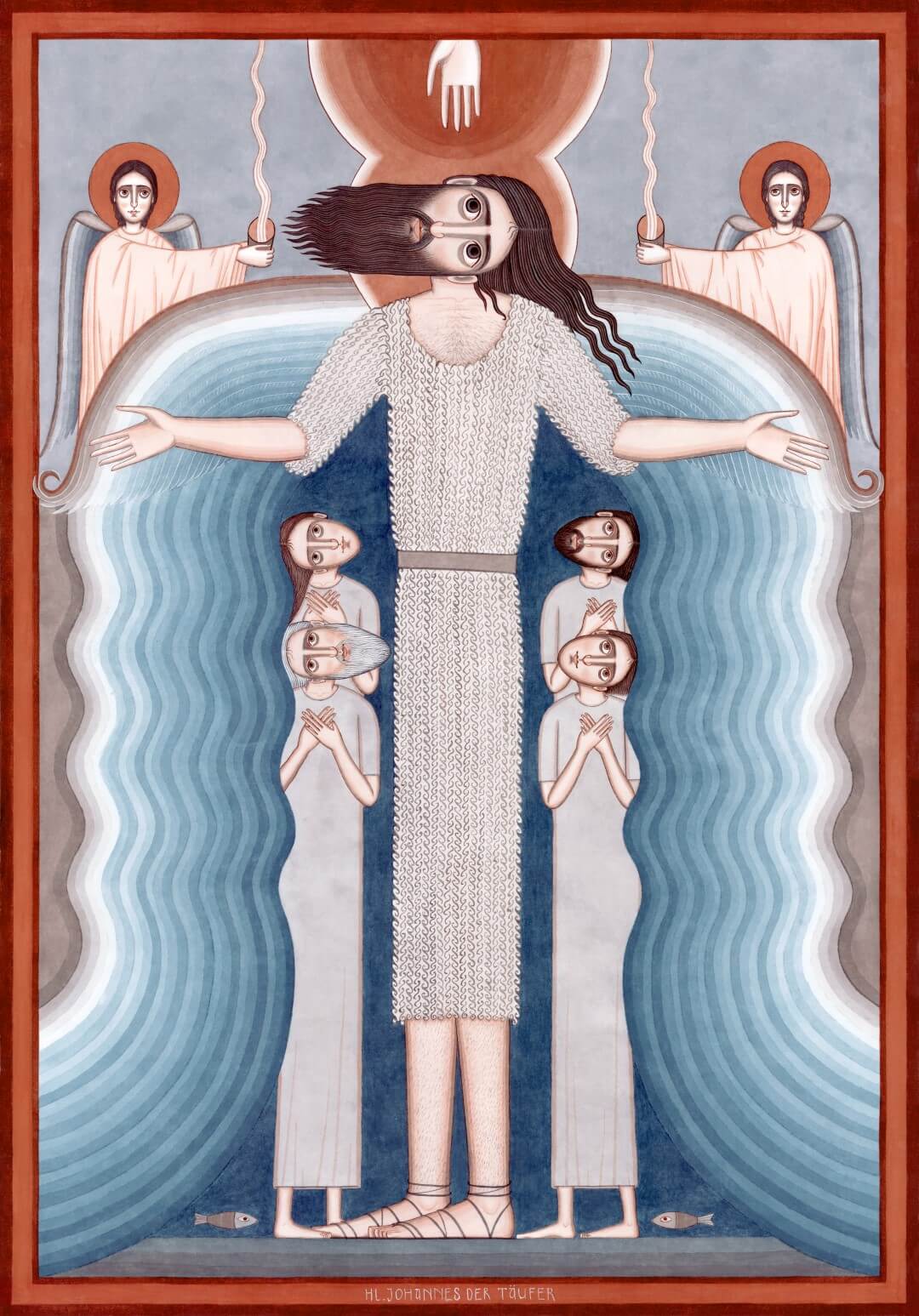 St-John The Baptist (from the Witness Cycle),
Work by Nikola Sarić
Watercolour on paper,
Executed in 2011
© Nikola Sarić, all rights reserved

St-John The Baptist (from the Witness Cycle),
Work by Nikola Sarić
Watercolour on paper,
Executed in 2011
© Nikola Sarić, all rights reserved

A greater than John the Baptist has never been seen

Jesus spoke to the crowds: ‘I tell you solemnly, of all the children born of women, a greater than John the Baptist has never been seen; yet the least in the kingdom of heaven is greater than he is. Since John the Baptist came, up to this present time, the kingdom of heaven has been subjected to violence and the violent are taking it by storm. Because it was towards John that all the prophecies of the prophets and of the Law were leading; and he, if you will believe me, is the Elijah who was to return. If anyone has ears to hear, let him listen!’

Reflection on the Contemporary Icon

This Gospel reading of today seems slightly confusing at first. Jesus on the one hand compliments St John the Baptist by saying that ‘a greater than John the Baptist has never been seen’. But at the very same time, Jesus also seem to say the opposite by stating that ‘yet the least in the kingdom of heaven is greater than he is’. Jesus shows herewith his truly unique ability to show people how small they are, but by doing so, showing their greatness when they fully participate in God’s mystery.

The world around us has different standards of measuring greatness: political and social achievements, celebrity, wealth, power, etc…  Jesus tells us in this reading that God’s measure of greatness is entirely different: if we want to be great, we need to seek the Truth, and find God. John the Baptist was certainly a spiritual giant, but he lived before Christ’s Passion and Resurrection. We, on the other hand, live in a time where the Messiah has come and we know what He did for us on the cross and also expect His return. So where John was proclaiming only the coming of the Messiah, we can proclaim the (Second) Coming too, but also in the awareness and knowledge that Christ has already been once before for our salvation.

The watercolour on paper illustrated here, is by Nikola Sarić, a Serbian painter who works in the tradition of Icon paintings, but combining it with a new contemporary twist. It is this tension and dialogue between traditional icons as we know them in the Christian Orthodox traditions, and avant-garde contemporary art which makes for very poignant and striking works. We see a highly stylised image of St John dressed in camel hair clothes, surrounded by flowing water, standing under Christ’s hand reaching down and angels capturing His blood in two chalices.

Feast of Our Lady of Mount Carmel

John the Baptist in his prison had heard what C...

A greater than John the Baptist has never been ...