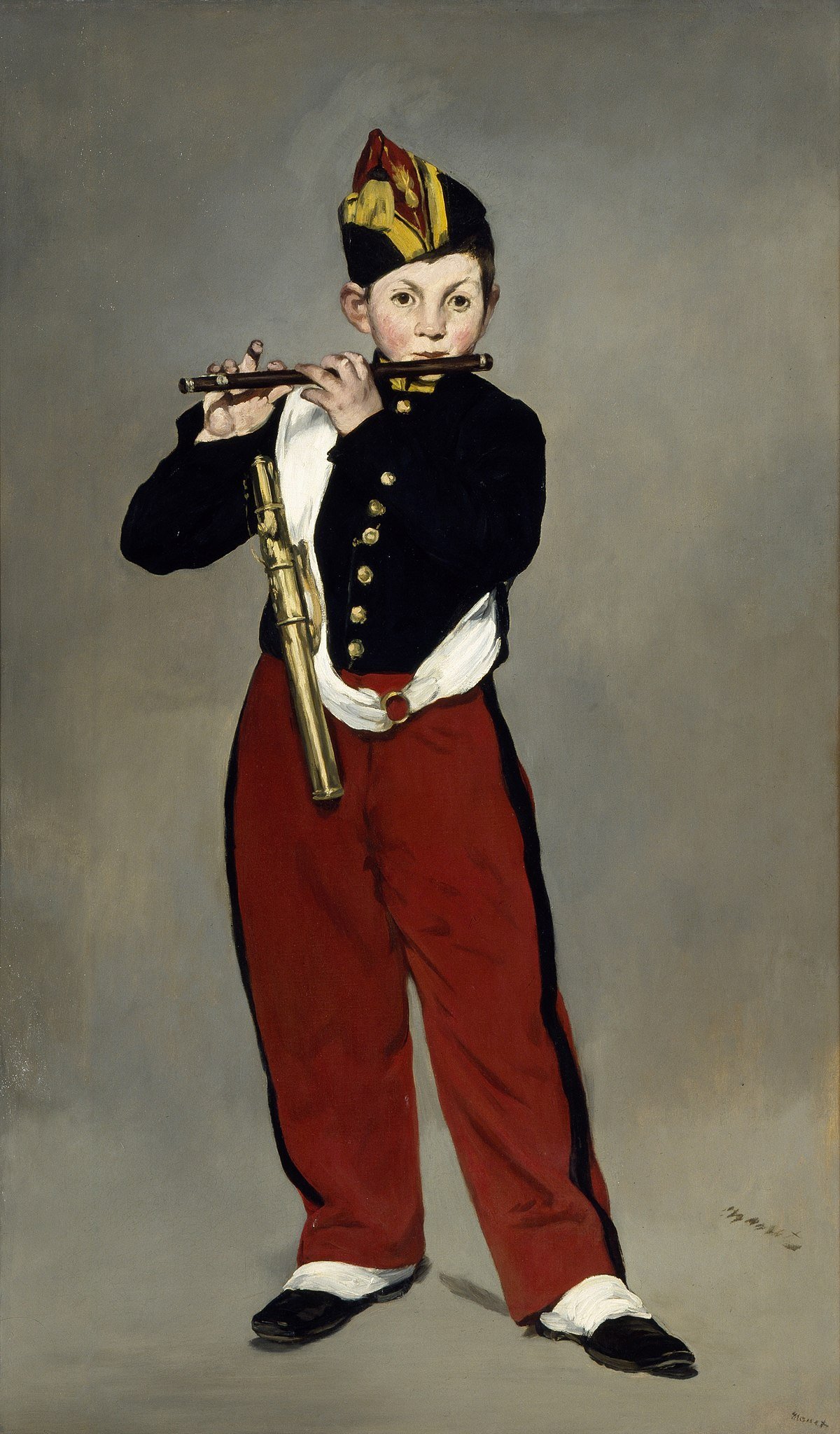 The children played the pipes for you, and you wouldn’t dance

Jesus spoke to the crowds: ‘What description can I find for this generation? It is like children shouting to each other as they sit in the market place:

“We played the pipes for you, and you wouldn’t dance;

we sang dirges, and you wouldn’t be mourners.”

Édouard Manet travelled to Spain in 1865, where he was mesmerised by a painting by Diego Velazquez at the Prado in Madrid. Upon his return to Paris in 1866, he began work on a new painting inspired by Velazquez, depicting an anonymous regimental fifer of the Spanish army. Manet presents the uniformed boy, in a manner that imitates the formula of Vélazquez's court portraits, against a flattened, monochrome background of neutral tone, thus frustrating attempts for the viewer to assess the figure's true size or importance. It is all about the young man joyfully playing, no distractions around him, and it isn’t important for us to know who he actually was.

Just pure joy to look at this beautiful painting of a fifer joyfully playing. To most of us, the children playing in the market place might just be a normal scene: we don’t pay much attention to it. For Jesus, however, such a scene offered a vivid image of life. He says that there are scenes around us of joy, where 'children are playing the pipes for you and you won't dance'.

The reading asks us to notice the small things in our lives, the incidental happenings, the joyful scenes around us, and appreciate them.  God is giving us so much, but at times we fail to see it.

Thank you Patrick for your reflection. It is easy to see the inspiration drawn from Diego Velazquez. One of my favorite paintings by Velazquez is Christ Crucified. It is Christ on the cross on a plain dark background with no other distractions.

You are so right Patrick. We miss so much going on around us. All of it has meaning and even as observers we are part of it all. Thank you.

Speaking of noticing the small things, the incidental happenings, I found the most beautiful autumn leaf last month and I’ve been trying to attach a picture of it to this message but have failed. Little things and events can be very interesting. I think it was Chekhov who said that no incident, however small, involving us humans, cannot have a play written about it!!

Imagine being the subject of a Chekhov play!!

Pleasure in the smallest things – therein lies a lot of happiness. You will constantly have your heart lifted.

Manet is one brilliant, brilliant painter.
I always find it so interesting how artists travelled, saw other approaches to painting and interpreted them in their own works. Art is a growing, living thing.
As to the gospel today, Jesus is so accurate in His observations; people leap upon first impressions, run with that, and don’t THINK!
Good morning all – blessings and a prayer for each of you who look in, in whatever circumstances you find yourself today.

Well said Patricia. I believe there to be quite a few people looking in on this site who enjoy the comments. I met one in the Festival Hall last night!
I remember Rufus Firefly with affection!

Patricia, I love you! For who you are and, more important, how I feel when I read your comments. I love chazbo too; he’s so skipping from one topic to another but he’s always to the point. I love reading your comments. And last but not least: I love Patrick, for his daily gospelreadings, his kind comments and his prayers for everybody. I love you all and pray for all of you!!

Love is all around!

Thank you Patricia. Blessings to you also.

John in his prison sent his disciples to Jesus

Shoulder my yoke and learn from me

Jesus began to reproach the towns who refused t...

A greater than John the Baptist has never been ...