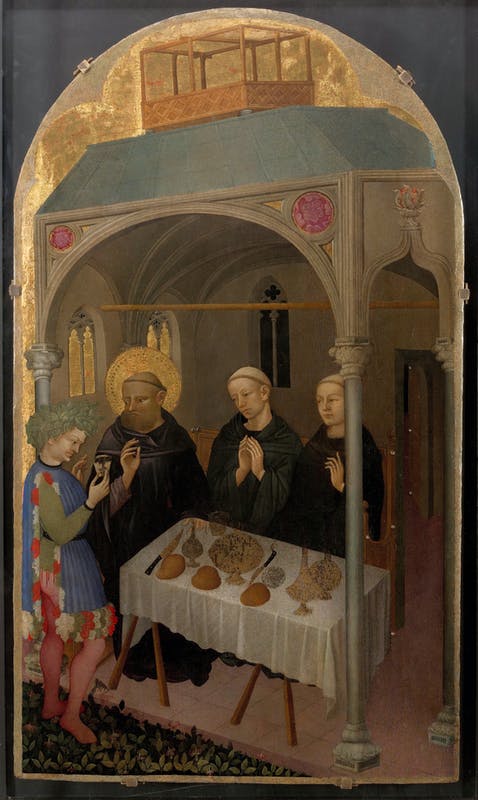 St Benedict and the Poisoned Wine,
Painting by Niccolò di Pietro (documented between 1394 and 1427),
Painted circa 1415-1420,
Tempera on wood
© Uffizi Gallery, Florence

St Benedict and the Poisoned Wine,
Painting by Niccolò di Pietro (documented between 1394 and 1427),
Painted circa 1415-1420,
Tempera on wood
© Uffizi Gallery, Florence

Peter spoke to Jesus. ‘What about us?’ he said. ‘We have left everything and followed you. What are we to have, then?’ Jesus said to him, ‘I tell you solemnly, when all is made new and the Son of Man sits on his throne of glory, you will yourselves sit on twelve thrones to judge the twelve tribes of Israel. And everyone who has left houses, brothers, sisters, father, mother, children or land for the sake of my name will be repaid a hundred times over, and also inherit eternal life.’

Today we celebrate the Feast of Saint Benedict. As I went to a Benedictine school in Belgium, the Benedictines will always hold a special place in my heart. It is probably there at school, through seeing the quiet witnessing of the monks, that the seed of discerning a possible vocation to the priesthood was sown.

Saint Benedict was born circa 480 AD to a wealthy family in the region of Umbria in Italy. After a young life of privilege and decadence, he met a monk called Romanus of Subiaco (died ca. 550 AD), who convinced him to change his ways and to live alone in a cave near Subiaco for three years, in order to demonstrate his commitment to his Christian faith. Romanus checked in on the young Benedict on a regular basis and when the three years were served, Benedict was given the call to become abbot for fifteen monks who already lived in a monastery nearby. Benedict assumed control of the monastery and insisted that his monks follow the strictest manner of worship and mission. Some of the monks became seriously upset with all his demands and out of the disillusionment came a conspiracy to kill Benedict by poisoning his wine. As he blessed his wine cup, it shattered, saving his life. Our painting depicts the moment when Saint Benedict blesses the cup which is brought to him by a lavishly dressed layman.

Just as in today’s Gospel reading, St Benedict left everything to follow Christ. No half-way compromises; a full commitment to his mission and leave his comfortable life behind.

I am new to this website but have looked each day at Christian Art and the comments by Patrick van der Vorst Some are challenging, some are so beautiful but always a joy to start my day

My son went to the same school. He also is still very grateful to the monks for the best education: christian and … in general, as well. Ora et labora.

The more ancient the painting, the more I find I like it! Odd little scene though…
St Peter’s cry “We’ve left everything for you”…and they left a lot! Much like you Patrick…
We should be mindful and thankful for the sacrifices our priests have made to serve us in His church.

A bit like the story of St John who’s cup had poison put in and when he blessed it a little devil came out!

Let the little children come to me

What God has united, man must not divide

It is easier for a camel to pass through the ey...