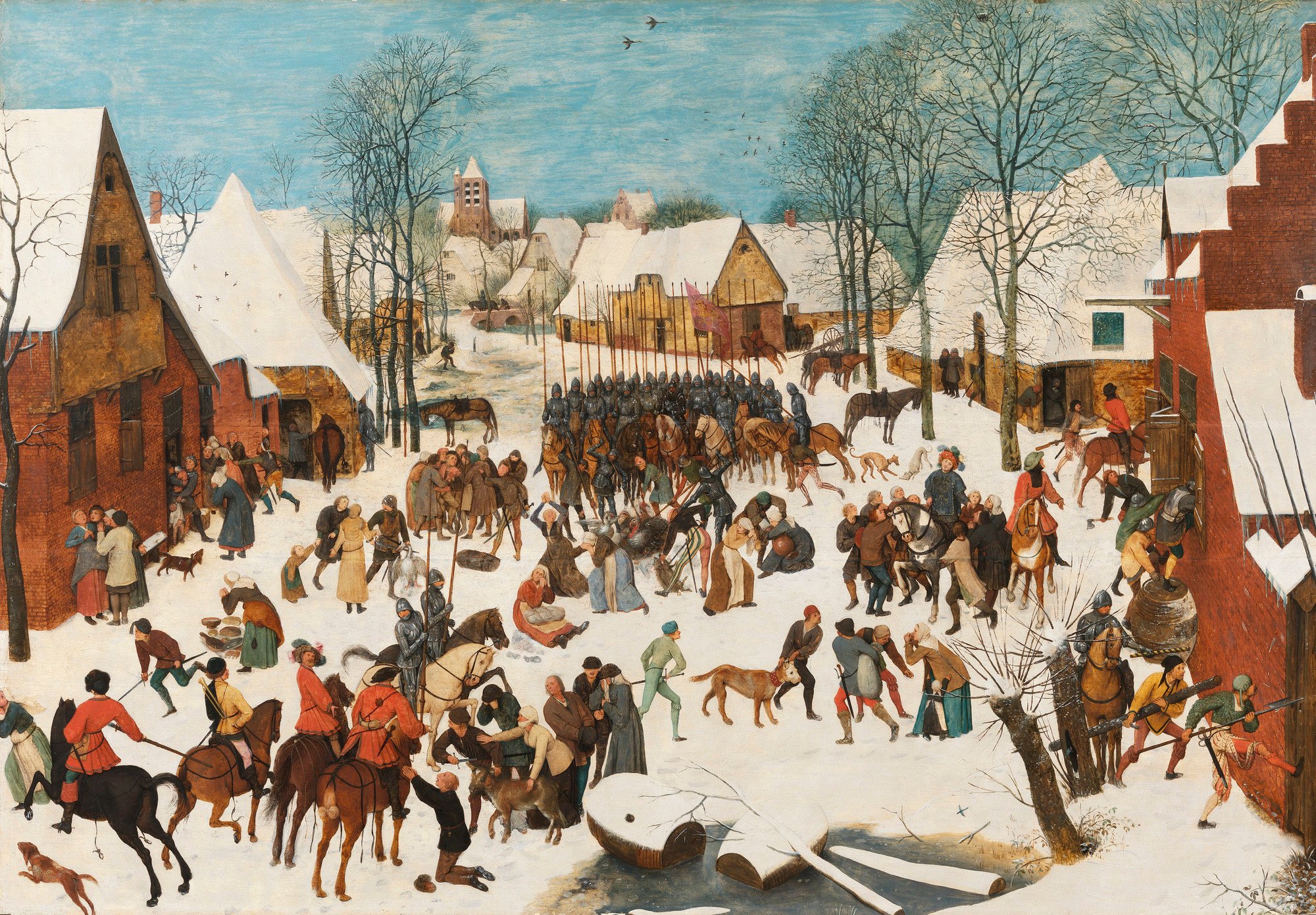 The Massacre of the Innocents,
Painted by Pieter Breughel the Elder (circa1525-1569),
Painted in 1565-66,
Oil on canvas
© The Royal Collection, The King’s Closet, Windsor Castle

The Massacre of the Innocents,
Painted by Pieter Breughel the Elder (circa1525-1569),
Painted in 1565-66,
Oil on canvas
© The Royal Collection, The King’s Closet, Windsor Castle

The massacre of the innocents

I called my son out of Egypt.

Herod was furious when he realised that he had been outwitted by the wise men, and in Bethlehem and its surrounding district he had all the male children killed who were two years old or under, reckoning by the date he had been careful to ask the wise men. It was then that the words spoken through the prophet Jeremiah were fulfilled:

A voice was heard in Ramah,

it was Rachel weeping for her children,

refusing to be comforted because they were no more.

Today’s Gospel reading shows the gruesome nature of King Herod. Matthew tells us that after hearing from the wise men of the birth of Jesus, the king ordered that all children in Bethlehem under the age of two should be murdered. Our painter, Pieter Breughel, gave a contemporary depiction of the scene, showing the soldiers of the Spanish army and their German mercenaries killing innocent Flemish lives. Flanders was ruled by the Spanish branch of the Habsburgs from 1556 to 1714. The winter before Breughel painted our artwork was exceptionally hard, with plenty of snow and ice, during which many lives were lost. Hence he used the harsh weather background to accentuate the cruelty of the massacre of the innocents.

As usual for Breughel, there is so much to look at in this painting. Many different scenes are juxtaposed. Shortly after this painting was made, it came into the possession of the Holy Roman Emperor, Rudolph II, in Prague. He found the painting to be too gruesome and so he decreed that the slaughtered babies should be painted over and replaced by details such as bundles of hay, food, and animals, to make it a more acceptable image and easier to look at. So we are left now with a scene of the Massacre of the Innocents without slaughtered babies being present. Just to draw attention to a few such ‘replacements’: in the centre left we see a standing woman grieving over her dead baby lying in the snow (subsequently replaced by ham, bread and food); a couple seem to beg a soldier to take their daughter rather than kill their baby son (changed to a swan); towards the middle of the painting a seated woman grieves with her dead baby (changed to a bundle) on her lap ; a soldier stabs at a baby (changed to a pitcher) cradled by a seated woman (middle right); etc…

Matthew's account portrays the world into which Jesus was born as one where those in power were ready to sacrifice innocent people if necessary, to ensure their own political gain. As a consequence, the Holy Family whom we celebrated yesterday became refugees in the land of Egypt, far from their own home. So today is a good day to pray for all the refugees worldwide who have been driven from their homes because of the abuses of political power. Lord, we pray and ask you to look with mercy on those who today are fleeing from danger, are homeless and hungry. Protect them and inspire compassion in all our hearts.

The Massacre of the Innocents

The flight into Egypt

The Massacre of the Innocents

The Epiphany of the Lord