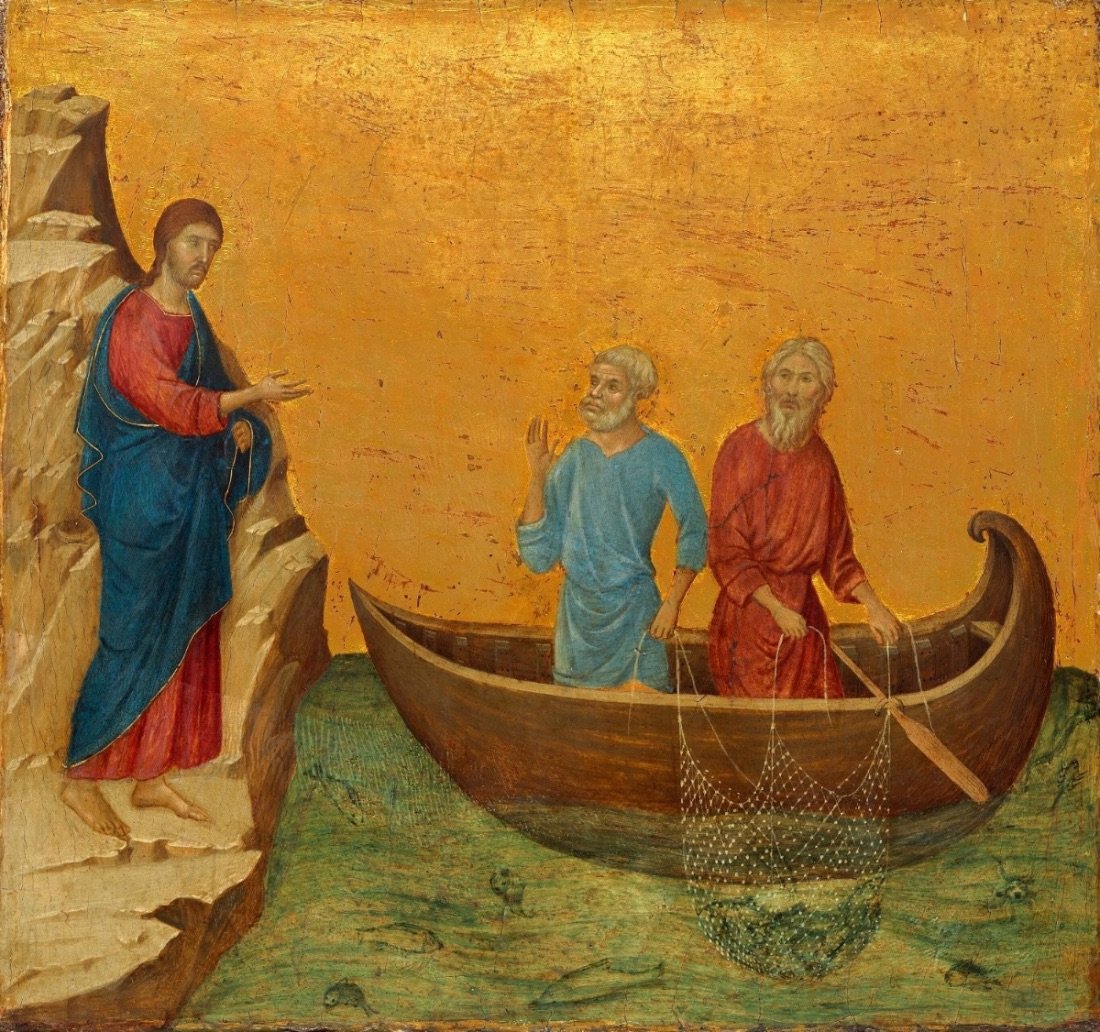 As Jesus was walking by the Sea of Galilee, he saw two brothers, Simon, who was called Peter, and his brother Andrew; they were making a cast in the lake with their net, for they were fishermen. And he said to them, ‘Follow me and I will make you fishers of men.’ And they left their nets at once and followed him. Going on from there he saw another pair of brothers, James son of Zebedee and his brother John; they were in their boat with their father Zebedee, mending their nets, and he called them. At once, leaving the boat and their father, they followed him.

Reflection on the Painted Panel

This small panel was part of the Maestà, one of the most important masterpieces in the history of Western painting. The monumental Maestà was a two-sided altarpiece that dominated the main altar in Siena’s cathedral for nearly two centuries. This panel is part of the back section. It shows Jesus calling Peter and Andrew, as per today’s Gospel reading. This painting is one of the last panels Duccio did for the Maestà. Painted circa 1308, the figures are very human in their expression, their gestures tell the story (Jesus asking the question, and the two apostles responding), the draped clothing reveal the body outlines below which was quite adventurous for its time, etc… Yes the sky and sea are not worked out in detail, showing us that Duccio is more interested in conveying the story rather than painting an elaborate landscape.

Andrew and Peter were the very first apostles to be called by Jesus. They must have been very special for Jesus to chose them; or were they? Were they just ordinary fishermen, but became extra-ordinary after their calling and giving themselves to Christ? Yes, that is probably right. Whilst they had talents in them to achieve great things, these talents burst to life after they met Christ.

Yet, they still had to respond to their call. Jesus may have called them and invited them to join Him, however Andrew and Peter both had to respond. That was their decision and their decision only. The calling is there, but the response is our own responsibility we take in all freedom. Andrew and Peter responded with generosity of heart and thanks to their response, literally billions of people throughout Christianity were shared the Good News. Two humble and generous fishermen, changing the lives of billions of people throughout the ages… Two great man, willing to be small, but in that humility, achieving the greatest of things… still fishers of people to this day!

In this way the prophecy of Isaiah was to be fu...

Jesus tempted by the Devil