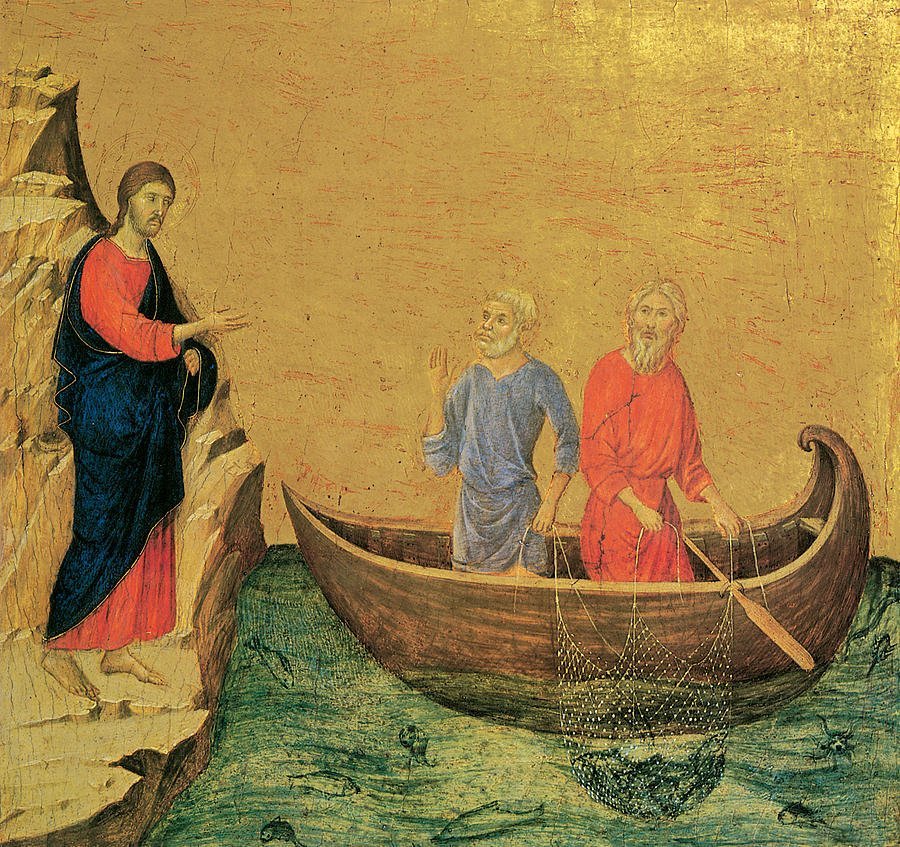 As Jesus was walking by the Sea of Galilee, he saw two brothers, Simon, who was called Peter, and his brother Andrew; they were making a cast in the lake with their net, for they were fishermen. And he said to them, ‘Follow me and I will make you fishers of men.’ And they left their nets at once and followed him. Going on from there he saw another pair of brothers, James son of Zebedee and his brother John; they were in their boat with their father Zebedee, mending their nets, and he called them. At once, leaving the boat and their father, they followed him.

This small panel was part of the Maestà, one of the most important masterpieces in the history of Western painting. The monumental Maestà was a two-sided altarpiece that dominated the main altar in Siena’s cathedral for nearly two centuries. This panel is part of the back section. It shows Jesus calling Peter and Andrew, as per today’s Gospel reading. This painting is one of the last panels Duccio did for the Maestà. Painted circa 1308, the figures are very human in their expression, which was very avant-garde for the time when this was painted. Their gestures tell the story (Jesus asking the question, and the two apostles responding). The draped clothing reveal the body outlines below which, again, was quite adventurous for its time. The sky and sea are not painted with any great detail, showing us that Duccio is more interested in conveying the story rather than painting an elaborate landscape.

Andrew (whose feast day we celebrate today) and Peter were the very first apostles to be called by Jesus. They must have been very special for Jesus to chose them; or were they? Were they just ordinary fishermen, but became extra-ordinary after their calling and giving themselves to Christ? Yes, that is probably right. Whilst they had talents in them to achieve great things, these talents burst to life after they met Christ!

Yet, they still had to respond to their call. Jesus may have called them and invited them to join Him, however Andrew and Peter both had to respond. That was their decision and their decision only. Andrew and Peter responded with generosity of heart, out of their own free will. Thanks to their response, literally billions of people throughout Christianity heard the Good News.

For me this is, (since I joined not long ago) the most introspective reflection about today’s art and Gospel. The way you use your words seduce to meditate on the weight of decisions and how they impact us and others. Again, thanks for sharing your wisdom Father Patrick and all members for sharing your insights.

‘Follow me and I will make you fishers of men.’

“He (Jesus) is offering himself. It’s as if he’s saying, “Walk in my path; walk in imitation of me.”

Finally, Jesus explains, “I will make you fishers of men.” This is one of the best one-liners in Scripture. Notice the first part of the phrase: “I will make you . . .” This is counter to the culture’s prevailing view that we’re self-made, that we invent and define our own reality. Jesus puts this lie to bed. We learn from him that it’s God who acts, and if we give ourselves to his creative power, he will make us into something far better than we ever could.”

The Duccio altarpiece was restored and exhibited in Sienna perhaps 7 or 8 years ago , I made a special trip to see it and it is magnificent. Patrick’s text brings a realisation of just how important were the disciples saying yes to Jesus. It gives me a heartfelt, solemn respect to those fishers of men

Thank you Stephen.
Wonderful to hear you saw the Maesta up close. I should go and visit again too.

The earlier the work, the more I love it. A key moment here in our church’s history!

You are a preRaphaelite!?

Just love this’ simple ‘ painting,
Maybe simple, but it says so much

I agree, it is simple but yet very effective and powerful.

This is a truly lovely painting- simple but with a very profound message. Here in the UK the last census revealed less than half the population now call themselves Christian. I think it is now time we left our boats and climbed onto that rocky shore!

Beautiful panel double-side altar piece. More beautiful is your conclusion. So simple and greats as de panel self. I appreciated how artist works with so many effort to paint the side hidden for people. Isn’t that humble? Which artist is willing not to sign his work? Just a priest celebrating the mass that is the greatest work of art created on earth.

Yes I read the headlines too this morning. Very sad less than half of the people in the UK identify as Christian nowadays…. Still if we look at the glass being half full instead of half empty, that is still 30 million people who identify as being Christian! That is something to work with for us as a church…

Comforting words Patrick. A half is more than a third but who’s measuring lol!

I hope the Maesta is still intact somewhere?
In order to follow Jesus today we have to eschew large portions of our current Western lifestyle. The amassing of wealth, endless holidays, tireless consumption, sexual adventure, huge meals and endless drinking, cars and yachts etc, etc! And people don’t want to do that for the most part….Hope I’m not being too downbeat!!

Charles, I too hope that the Maestá is still intact somewhere. BUT there are so many people in my country, the Netherlands and even more in England, who are poor, not able to buy enough food…, not even have warmth because energy has become so crazy expensive… they have no endless holidays, huge meals etc. they are hungry and cold. They are the people who are close to Jesus’s heart. I can only pray for them but wish to be like Elisabeth of Thüringen and bring them bread…

Thank you Charles.
Most of the Maesta’s double-sided altarpiece is at the Siena cathedral museum but several of the predella panels (such as the panel today) are scattered outside Italy in various museums.

Wouldn’t that be a splendid project for an Italian art institution to reassemble the whole altarpiece, at least temporarily, for an exhibition?

That isn’t my lifestyle Charles! Most people I know work hard for little pay, can’t afford holidays (I can’t get holiday pay let alone away!) I struggle with my food and heating bills, etc etc. The poor always find it easy to follow Him. That isn’t to say I envy the rich, it is what they do with their money that makes them followers of Christ. Apologies for the rant.!

I quite see that not everyone in the West has everything that I list but i am suggesting that these are the goals that our society seems to believe are what should be aimed for.

Fewer and fewer I believe- aspiration is one thing but exclusion something very different. As the gap widens and fewer own the majority of the riches more and more will become liberated from the myth that wealth means money.

You mean, you’ve given up your yacht Chasbo ?

I couldn’t afford the mooring fees!!

Very insightful. I think that is why Jesus said “narrow is the way”.

Repent, for the kingdom of heaven has come near

In this way the prophecy of Isaiah was to be fu...

The people that lived in darkness has seen a gr...

The people that lived in darkness has seen a gr...