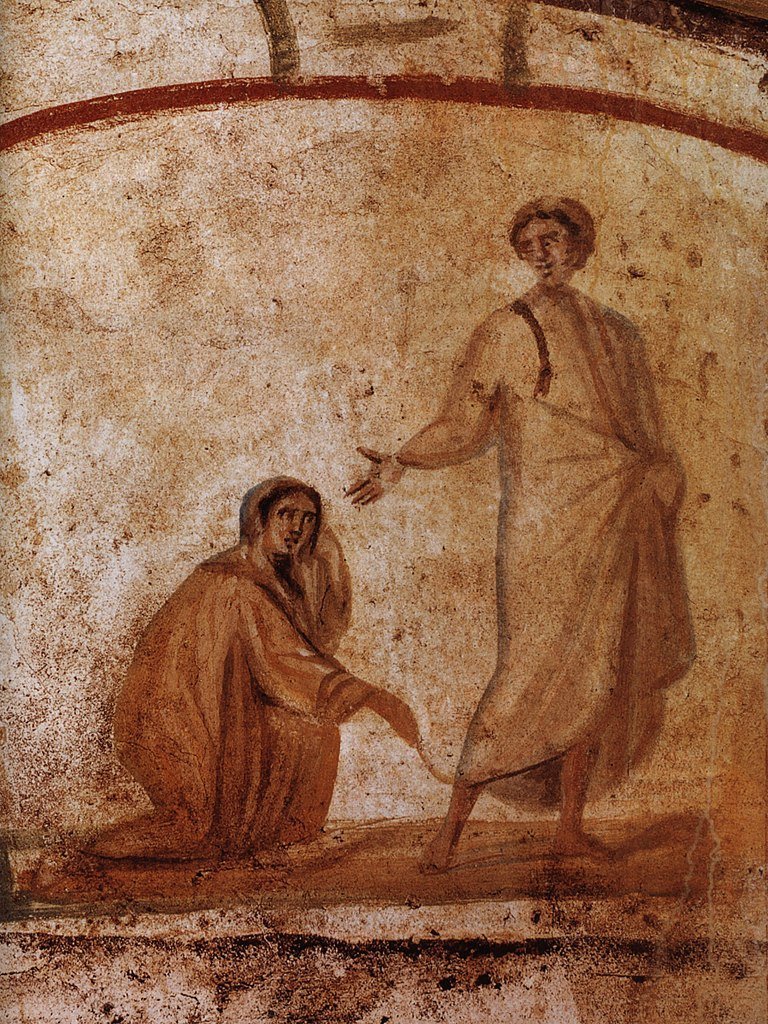 The healing of a woman who had suffered from a haemorrhage,
Catacombs of Marcellinus and Peter, Rome,
First half 4th century
© Wikimedia

The healing of a woman who had suffered from a haemorrhage,
Catacombs of Marcellinus and Peter, Rome,
First half 4th century
© Wikimedia

The woman with the haemorrhage touched the fringe of his cloak

While Jesus was speaking, up came one of the officials, who bowed low in front of him and said, ‘My daughter has just died, but come and lay your hand on her and her life will be saved.’ Jesus rose and, with his disciples, followed him. Then from behind him came a woman, who had suffered from a haemorrhage for twelve years, and she touched the fringe of his cloak, for she said to herself, ‘If I can only touch his cloak I shall be well again.’ Jesus turned round and saw her; and he said to her, ‘Courage, my daughter, your faith has restored you to health.’ And from that moment the woman was well again.

When Jesus reached the official’s house and saw the flute-players, with the crowd making a commotion he said, ‘Get out of here; the little girl is not dead, she is asleep.’ And they laughed at him. But when the people had been turned out he went inside and took the little girl by the hand; and she stood up. And the news spread all round the countryside.

Reflection on the catacomb painting

Our artwork today is one of the very earliest representations of today’s Gosepl story of the healing of a woman who had suffered from a haemorrhage. It was executed in the first half of the fourth century in the Catacombs of Marcellinus and Peter, Rome. Christianity had become widely accepted after Constantine’s conversion in 312 and became shortly after the dominant religion throughout the Roman Empire. We see the woman touching the fringe of Jesus’ cloak and Jesus turning his attention to her.

The woman was healed, not because she touched Jesus’ cloak but  because of her faith. We may at times be somewhat superstitious, thinking that touching  the sculpture of a saint or  a relic may bring healing to us too. But Jesus makes clear in our reading that it is not the touching that will heal us, but faith that will restore us: not the touch but our faith that will invoke the intercession of a saint or the healing power of Christ.

I recall in Northern Spain a relic of the True Cross (held in the church of Santo Toribio) was toured through local villages.it was the most amazing reliquary I’ve ever seen! There was much reverence shown; my husband poo-pood it, but reading the history, why couldn’t it have been authentic? Besides, as Charles and Patrick note, authenticity is not the point, faith is.
Wonderful gospel and image today. Thanks.

very contemporary situation : belief in the manufacturability of man versus belief. Our faith ultimately gives the right answer.

I like relics! It was an Anglican priest who explained their relevance to me. The early Christians used to hear Mass in the catacombs with the bodies of martyrs from the Coliseum just feet away. So the dead were physically close to the living.

When Jesus reached the official’s house and saw...

Jesus made a tour through all the towns and vil...