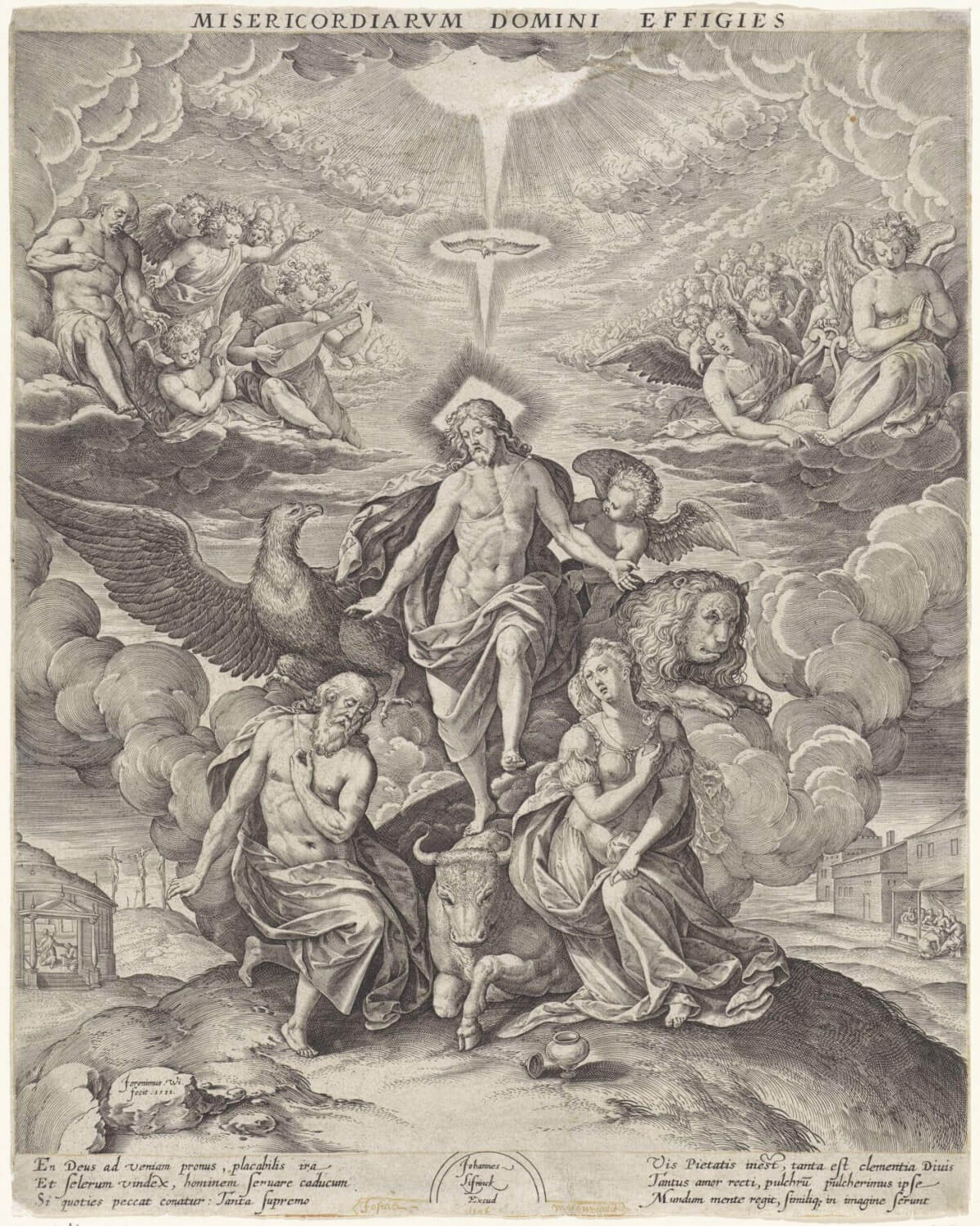 The Tax Collector went home again at rights with God, the Pharisee did not

Jesus spoke the following parable to some people who prided themselves on being virtuous and despised everyone else: ‘Two men went up to the Temple to pray, one a Pharisee, the other a tax collector. The Pharisee stood there and said this prayer to himself, “I thank you, God, that I am not grasping, unjust, adulterous like the rest of mankind, and particularly that I am not like this tax collector here. I fast twice a week; I pay tithes on all I get.” The tax collector stood some distance away, not daring even to raise his eyes to heaven; but he beat his breast and said, “God, be merciful to me, a sinner.” This man, I tell you, went home again at rights with God; the other did not. For everyone who exalts himself will be humbled, but the man who humbles himself will be exalted.’

Today’s Gospel reading is illustrated in our intricate and highly detailed engraving from 1596, but you may have to look for it. The parable of the Pharisee and the Tax Collector is on the far left, where both figures are seen in a circular temple, at the foot of the hills of Golgotha. It is set in a wider context of the Allegory of the Mercy of Christ (Misericordiarum Domini Effigies), the title of our engraving. We see Christ at the very centre surrounded by the four evangelists (angel, bull, lion, eagle), stretching out his hands in mercy to the publican and Mary Magdalene. On the right, we see a small scene where a woman is washing the feet of Christ in the house of Simon the Pharisee.

Today’s parable is about prayer. Both men went to the temple, but they approached prayer in a different way. The Pharisee’s prayer was a prayer of thanksgiving. It is of course a perfectly good and valid form of prayer, but there was one big flaw in it: in praying, he was judging other people, thanking God that he was not a sinner like them. The Pharisee looked down upon others, so in artworks depicting this parable he is always depicted standing, in an upright, confident pose, looking down upon the (usually) kneeling tax collector. The Pharisee may well have loved God, but he didn’t love his fellow temple-goer.

The prayer of the tax collector was different. It was a prayer of petition, in the full knowledge that he was a sinner and in need of mercy. He judged himself but didn’t judge others. The Pharisee judged others, but not himself. The parable invites us to pray during Lent as the tax collector did, not judging others and focussing on our own sins… knowing how much we are in need of God’s mercy.

Yes, I pray that we can go home at rights with God today. Blessings everyone.

A splendid image. It’s composition seems rather baroque but it is dated 1581. Ahead of its time?