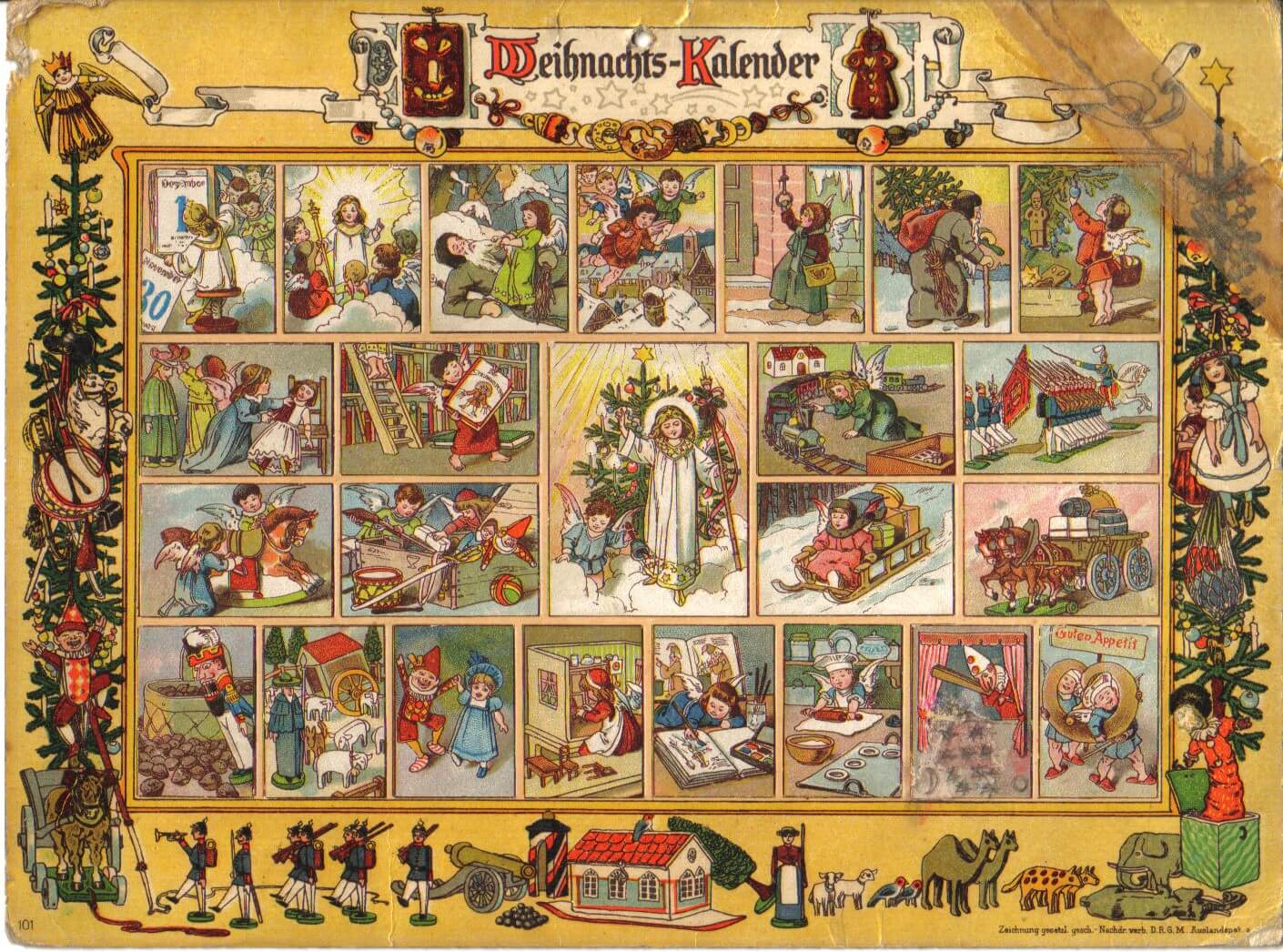 Jesus said to his disciples: ‘As it was in Noah’s day, so will it be when the Son of Man comes. For in those days before the Flood people were eating, drinking, taking wives, taking husbands, right up to the day Noah went into the ark, and they suspected nothing till the Flood came and swept all away. It will be like this when the Son of Man comes. Then of two men in the fields one is taken, one left; of two women at the millstone grinding, one is taken, one left.

‘So stay awake, because you do not know the day when your master is coming. You may be quite sure of this, that if the householder had known at what time of the night the burglar would come, he would have stayed awake and would not have allowed anyone to break through the wall of his house. Therefore, you too must stand ready because the Son of Man is coming at an hour you do not expect.'

Reflection on the Vintage Advent Calendar

And so we come to the first day of Advent. In its origins, this four-week period known as ‘advent’ (from the Latin word ‘adventus’ meaning ‘coming’) began as a time for early converts to Christianity to prepare for their baptism into the Church. Advent now though is the period of expectant waiting and preparation for the celebration of the birth of Our Good Lord, Jesus Christ. It also marks the beginning of the new Liturgical year.

For today’s artwork, I chose an Advent calendar dating from 1903. The origin of the Advent calendar can be traced back to the mid 19th Century. These first calendars came initially from the protestant areas in Germany where religious families made chalk lines for every day in December until Christmas Eve. It then evolved to these printed versions which people would hang in their houses. From the early 1900’s little hinged doors appeared, revealing a bible verse initially and later some chocolate behind these doors. During the Second World War, as cardboard was rationed and with a Nazi ban on the printing of religious calendars with images, this tradition disappeared. Production restarted in 1946 again.

I remember well, as a kid, having such an advent calendar at home, and it was very exciting every morning to get up and open the little door for that day (and yes, find some chocolate!). It is still a lovely way for involving children in the lead up to Christmas, and count the days to Christ’s light coming in to the world. In preparation for Christ’s coming, we can deepen our friendship with God and with our brothers and sisters around us, already finding Jesus in every single person, in every experience, in the world around us… that way, we will be prepared for Christ’s coming at Christmas and surround him with warmth as He comes into this world.