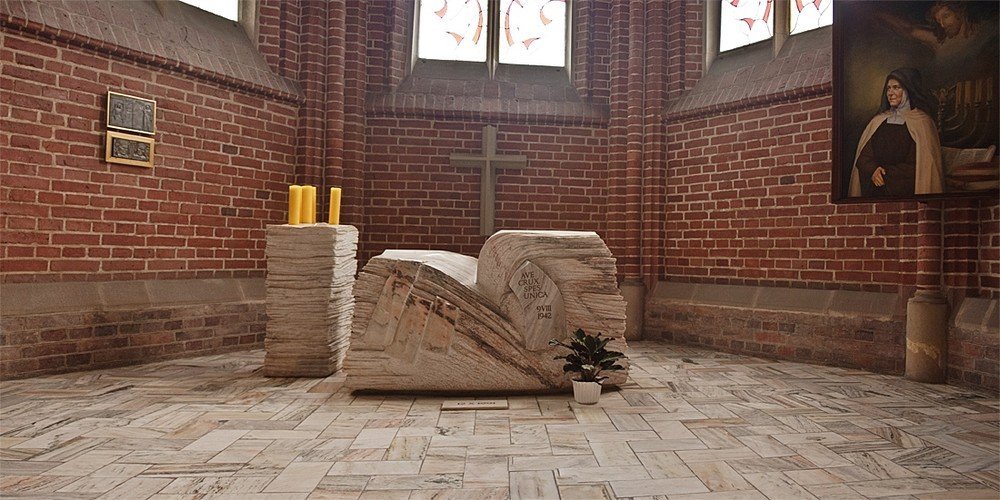 Feast of St. Teresa Benedicta of the Cross (Edith Stein)

Jesus told this parable to his disciples: ‘The kingdom of heaven will be like this: Ten bridesmaids took their lamps and went to meet the bridegroom. Five of them were foolish and five were sensible: the foolish ones did take their lamps, but they brought no oil, whereas the sensible ones took flasks of oil as well as their lamps. The bridegroom was late, and they all grew drowsy and fell asleep. But at midnight there was a cry, “The bridegroom is here! Go out and meet him.” At this, all those bridesmaids woke up and trimmed their lamps, and the foolish ones said to the sensible ones, “Give us some of your oil: our lamps are going out.” But they replied, “There may not be enough for us and for you; you had better go to those who sell it and buy some for yourselves.” They had gone off to buy it when the bridegroom arrived. Those who were ready went in with him to the wedding hall and the door was closed. The other bridesmaids arrived later. “Lord, Lord,” they said “open the door for us.” But he replied, “I tell you solemnly, I do not know you.” So stay awake, because you do not know either the day or the hour.’

Reflection on the side chapel altar

Today we celebrate the Feast of St. Teresa Benedicta of the Cross (Edith Stein, 1891 - 1942). Carmelite nun, martyr, and patron of Europe, she was born into an observant Jewish family. She had a distinguished career as a philosopher and received a doctorate at the University of Freiburg, but her academic career was impeded because she was a woman. After reading the autobiography of Saint Teresa of Ávila, she converted to Catholicism. She was baptised exactly 100 years ago, in 1922. She became a lecturer at the Institute for Pedagogy at Münster but was thrown out of her post in 1933 as a result of the Nazi regime’s anti-Semitic legislation.

She then entered a Carmelite monastery in Cologne and took on the name Teresa Benedicta of the Cross. Her order moved her to the Netherlands to keep her safe from the growing Nazi threat. On 20 July 1942 the Dutch Bishops’ Conference had a statement read in all churches condemning Nazi racism. In retaliation the authorities ordered the arrest of all Jewish converts to Christianity. Teresa Benedicta was taken to Auschwitz and killed on 9 August 1942. John Paul II canonised her in 1998 and proclaimed her a co-patroness of Europe the next year.

The photo I share is the altar of the Edith Stein Chapel in the Church of St. Michael the Archangel  (St. Michaelis Kirche in Breslau). This church was Edith’s preferred house of worship during her visits to Breslau, from the moment of her 1922 baptism until her last visit to her home city in 1933 before heading to the Carmelite monastery. In the centre of the chapel is a marble altar with the date of Stein’s death sculpted on it and the words Ave crux, spes unica (Latin for "Hail to the Cross, our only hope). The altar also houses an urn containing earth and ashes from Auschwitz-Birkenau, as well as other relics, including a fragment of her habit.

Sobering today, both in the gospel and the reflection.

People like this St Teresa who give absolutely heroic witness to the faith really bring you to a sudden stop. How many everyday church goers would die for the faith? Not many and I don’t blame them. Luckily we don’t have to die for it nowadays.

Cardinal Michael Czerny on Edith Stein’s feast day:
On 9 August, Sr.Teresa Benedicta of the Cross entered the gas chamber and found death. She crossed the threshold and encountered the bridegroom face-to-face, fulfilling the nuptial pact with the crucified Christ for which, as a wise virgin preserving the oil of love for God, she had prepared herself.